History of the South Dumfries Fire Department
Main Menu → Previous Page → Next Page
Early History
Pages
IntroductionEarly HistoryDestructive Fires in St. GeorgeSince ThenBibliography
For many years, the Village of St. George depended on their basic fire fighting equipment and the courage of a small force of volunteers. In about 1910, the B. Bell Manufacturing Company in St. George provided the village force with a fire apparatus called a “goose neck” to help fight fires. This engine consisted of a watertight box and a set of brakes. Water was carried in buckets and poured into the box from which the water could be ejected through an iron pipe fashioned in the shape of a goose's neck. No hose was used on this curious mechanism; the operator stood on top and held this device. To change the direction of the stream it was necessary to move the engine.

The engine was equipped with a small bell that was used to warn the village during a fire. The old goose neck, as it was called, ceased to be used by the village in 1912 when the village fathers purchased a gasoline fire engine from the Waterous Engine Works in Brantford. Under the direction of two mechanical experts from the Waterous Manufacturing Company, the engine was given a test and proved that with a sufficient supply of water, it was capable of throwing a stream of water over the highest building in the village.

The same year, the construction of a Fire Hall began, and the St. George Fire Department was officially formed.

In 1923, the village decided to acquire a motorized fire truck. It arrived in St. George on September 19, 1923. The following day, a Civic Holiday was held in St. George, and firemen gave a demonstration of the new fire truck using both chemicals and water. 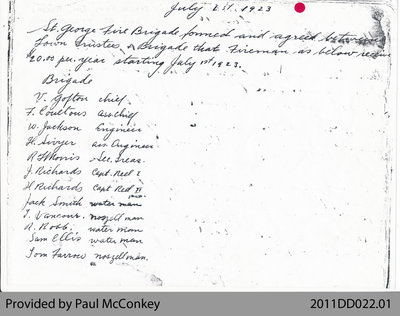 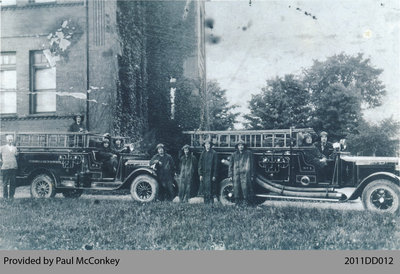 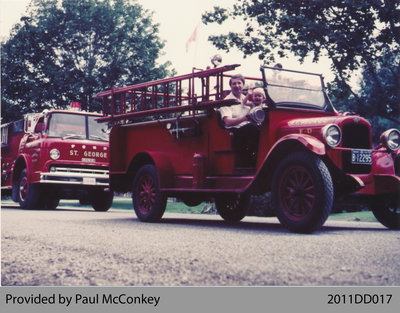