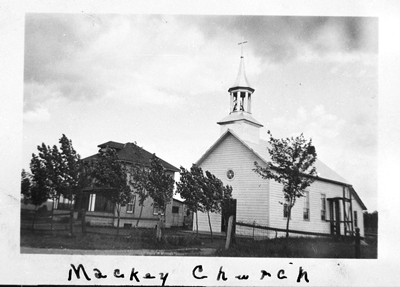 The Parish to the Missions

In 1891 the first chapel was erected at Mackey. Father Simonet O.M.I directed the building of this chapel and the chapel that was erected at Deux Rivières in 1893.

When the Diocesan Clergy replaced the Oblate Fathers in Mattawa in 1917, Mattawa continued to be the Parish to the Missions in the Townships. Father Duquette and his assistants, Father Hogan and Father Grier resided over the Missions until 1926.

In 1926 St. Narcissus Church of Mackey became the Parish to the Missions in Stonecliffe, Deux Rivières, and Bissett Creek (built in 1933). Father Drohan was the first priest at St. Narcissus Parish. 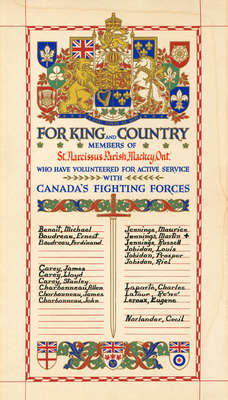 Once a month, keep in mind there weren't many (if any) cars in the townships in the 1920s, Father Drohan would make the trip out to the Missions in Stonecliffe, Deux Rivières and Bissett Creek to say mass and give communion. The Parish quickly became the social centre of the community of Mackey and various social events were held at the church. 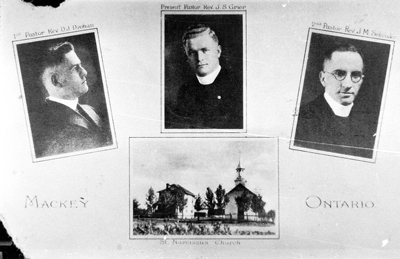 Following the end of World War II, the late 1940s and early 1950s brought many changes to the townships. For the first time since the railway was built in the late 1800s and the highway was built during the make work projects of the Depression (early 1930s), the forest economy was not going to be the sole provider of jobs.

A hydro electric generating station was going to be built on the Ottawa River at Rapides-des-Joachims. This meant jobs for local men and woman and the "displaced persons" who were coming back from the war and receiving their discharge papers from the army at Camp Petawawa.

Though this mega project had its promised benefits, hydro electricity, in home plumbing, and telephones in every home in the townships, it came with a cost. Hydro was going to be expropriating land by the Ottawa River in preparation for the rising water levels created by the dam and head pond. This meant homes, local businesses, schools and the churches were going to have to be dismantled and relocated.