Creators
Little, Carroll Herman, Correspondent
Little, Candace
, Recipient
Media Type
Text
Item Type
Correspondence
Description
Typewritten letter from Carroll Herman Little to his mother, Candace Little, on October 28, 1939. Little describes family life with wife Bonnie and their children, and his work as a Lutheran pastor and faculty member at the Evangelical Lutheran Seminary of Canada in Waterloo, Ontario. In this letter, Little discusses the war, his son Herman's move to Ottawa, and his writing.
Notes
Carroll Herman Little (1872-1958) was a Lutheran pastor, and a professor and administrator at the Evangelical Lutheran Seminary of Canada (now Waterloo Lutheran Seminary) in Waterloo, Ontario.

Frederick and Eileen have already written their letters and absorbed most of the news, especially the Big news about Herman’s going away, leaving me Little to write about. Happily I am a commentator, having had long practice as an exegete; so this will be my avenue of escape. None of the previous writers have dwelt on the emotional feature of Herman’s departure, whichleaves me something to say. The emotional feature is as usual seen at its best on the maternal side. Since Herman has gone Bonnie has been shedding bitter tears – because she no longer sees his little car coming up the street bringing him home for one o’clock dinner, after all the rest have eaten; because he no longer comes home anywhere from 8:30 to 10 p.m. for late supper; and because he is no longer sleeping in his little single bed till he is awakened two or three times around nine o’clock in the morning, and his room is empty save for Arthur and Frederick, who are still occupying it. It is all very sad; one would think from the tears that flow that this Little boy’s body was lying slain on the battlefields of Europe. But these emotions are only passing surges like the squalls of snow to-day which are so quickly dissipated by the outbreak of the glowing sun through the swiftly moving clouds, after which it is brighter than ever. So I hope also that it will be with Bonnie. In fact she admits now that she may get over it, but maintains that if she does she will never look like anything, and that hereafter life will no longer be worth living. I think now you have a clear idea of the emotional side of Herman’s evacuation

of the homestead with which he has been connected very closely for the last twenty-seven years. He had the good fortune to sell his little car for $200.00 just before leaving the capital city of our Dominion, and this was just about what he paid for it- so he is practically nothing out. The only drawback is that we will get no more rides and will consequently have to walk when we want to go down town or anywhere; but his may give our lazy limbs the exercise they need. So you see there is always compensation in everything. Maybe you saw my name in last week’s Lutheran. I sent off the paper that the Editor of the Canada Lutheran was afraid to publish; and though I did this on a venture and had my doubts about its acceptance, it came out for all. As this is the second article I have had published in the Philadelphia Lutheran, I am beginning to think that I have been restored into the graces of that publication house. They had one mistake is setting the t ype, using too many “it”s where the copy had “church” for one of them, which rendered the meaning cloudy and somewhat dubious; but otherwise it was well done. Last Tuesday night Herman took Bonnie and me down to Ruth Maurer’s apartment in Kitchener, where we with Dr. and Mrs. Maurer and Mrs. Rohrig (Mrs.Maurer’s sister) and a few others joined in celebrating Dr. Maurer’s 80th birthday. They had a fine birthday cake, coffee, cigars, and icecream , and all the frills that go with them, and we joked and chatted and had a good time. Old Dr. Maurer seems to be holding his own quite well. I had a nice card from Aunt Carrie the other day, written with a pencil as she lay in bed on her back, but for all that quite easily legible. I thought it was real nice of her write to me under such circumstances, and lost no time in sending her a reply. She told me Aunt Nora’s Grace had just gone through an operation for cancer. It seems that that disease is taking quite a hold on the Littles. I hope to hear when a letter comes again of improvements in Herbert and also Aunt Cam. The war is still lugging along on the high seas and in Europe, but has hardly started in earnest

as yet. When once it strikes its full blast there will be such a holocaust of destruction as this old world has never experienced before, and whichever sides gains the loss will be irremediable. I see your President has had his way at least with the Senate and has secured their assent to the removal of the embargo on arms. This turned out as I expected and shows that Hitler has nothing on his as a Dictator. This is the first step in dragging the U.S. into the fray; but money talks long and loud; and blood money is deemed just as good as any other money to bring about prosperity. But a neutral country will pay for it very dearly in the long run. Our Dominion could not very well keep out of it after the Mother Country had declared war, but the United States could and should do so. Bonnie has an unusual pet – a wild black squirrel. Every day it comes around and eats peanuts right out of her hand. If it is over around the Clausens and she calls to it, it will come hustling across the campus as fast as its legs can carry it, and it frequently comes even into the kitchen and dining room. Little Carl feeds it too sometimes. The other day he was up in my study and he said, “Grandfather, you ought to see the squirrel down stairs, the darling little squirrel comes into the kitchen and dining room: it is so cute.” Little Carl picks up everything that he sees and hears. Mrs. Clausen was telling me this morning that when he says his prayer at the table he crosses himself and says in the Name of the Father etc”. So you see he is quite observant. Carolus and his family may be with us for a couple days next week while the paint is drying in their new house, into which they will move toward the end of the week. Lovingly, [signed] Carroll 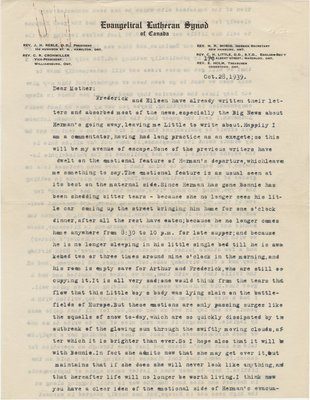