Creators
Little, Carroll Herman, Correspondent
Little, Candace
, Recipient
Media Type
Text
Item Type
Correspondence
Description
Typewritten letter from Carroll Herman Little to his mother, Candace Little, on October 14, 1939. Little describes family life with wife Bonnie and their children, and his work as a Lutheran pastor and faculty member at the Evangelical Lutheran Seminary of Canada in Waterloo, Ontario. In this letter, Little discusses the austerity measures, happenings in the parish and his sons.
Notes
Carroll Herman Little (1872-1958) was a Lutheran pastor, and a professor and administrator at the Evangelical Lutheran Seminary of Canada (now Waterloo Lutheran Seminary) in Waterloo, Ontario.

We were all glad to get Pearl’s triple letter, which reached us on Friday, probably making the trip on such speedy time because it was a “trip-le” letter. Be that as it may, we were all glad to hear that all is well at the old homestead, where we are always hoping that health and happiness may ever prevail. We were somewhat taken aback though over the news of Herbert’s operation , as we had had no intimation that he was ever sick, or ailing in any part of his anatomy; but we were glad to hear that he is making speedy progress toward recovery , and was expected home again in a week’s time. I wrote to him just about a week ago; but don’t know whether he got my letter before he left for the hospital in the capital city of Washington, or not. Here’s wishing him full and complete recovery from all his ailments!When Pearl’s letter arrived we were having exceptionally cold weather for the season of the year, early autumn. It struck us rather forcibly when she spoke of the “hot” weather you were having down there. We had the first flakes of snow on the day her letter came; and it has been snowing in fitful squalls off and on ever since though the ground is too warm to take it yet. I had been swimming every morning across the lake and back till Thursday morning inclusive. Since then, the water being cooler, I have cut the swim in half. We have been having it quite cool in our house for the last few days, the thermometer ranging around 60, which is almost too cool for comfort; and I had it even cooler than that in my little study. I think the janitor under

orders is trying to save coal, which like everything else has been going up in price. But it is too early to complain; for if this war keeps up, as it seems likely that it will, we will probably have to endure far greater hardships before the rigorous winter is over. Last Thursday night at the meeting of the Athenaeum Literary Society I heard an address by a military man, a Mr. Ballintyne, who is a colonel in the Scotch Fusiliers. His aim was to get young men to take a military training course leading to the position of non-commissioned officers in the Canada militia; but I don’t think any of the boys took the bait. At least I did not see any familiar names among the recruits printed in the paper. His plea was that they should take this course and qualify, so that when conscription comes they would be in a little better position than privates. Herman hasn’t heard back from the government since he answered their telegram; so he doesn’t know as yet what to expect. I don’t know but I imagine that they are holding back in the slight hope that some sort of agreement may yet be arrived at and the war called off; and do not want to do anything until they are absolutely sure that the decision is final. Bonnie heard Lindberg over the radio and I read parts of his speech in the papers. On the whole I think he takes a sensible view of the situation, although his implied criticism of Canada’s entrance into the war is hardly fair, as Canada could hardly do anything else, being as it is a part of the British Empire. The case is different with the U.S. But if it repeals the embargo, as it now appears that it will do, that will be the first step toward entrance into the conflict. It will cause a prolongation of the war and will inevitably, sooner or later, drag the U.S. in. What the U.S. really ought to do is prohibit the sale of munitions to any and all countries both in peace time and in war. This war

With its potent possibilities of destruction makes me sick at heart. It could so easily have been avoided if the rulers on both sides had used discretion and been willing to make reasonable concessions here and there. But ‘nough said on this sad subject.

One of our last year’s graduates, Earl Treusch of Kitchener, has received and accepted a call to the Milverton Parish and will be ordained to-morrow a week, probably in his home church, St. Matthew’s, Kitchener. Dr. Schmieder called me up to-night and asked me to take part in the ordination. In case the president can’t come, I will probably have the whole job on my hands. Dr. Reble tried to get Arthur to supply for him on that Sunday, but Arthur already had an engagement and couldn’t take it, and it is hard to get a supply man to take the German service. I think Arthur stands a good chance of receiving a call from the Ayton-Neustadt Parish, which will become vacant the first of November. A member of the council of the church at Ayton was down to see him this week and engaged him to preach for them around the 1st of November, which he agreed to do. This parish is still quite German, but will be a good parish for Arthur to start out in. Arthur is still having a couple days work a week at the Brewery Warehouse, which is a financial help to him. I haven’t heard anything from Dr. Neudoerffer about my book that is being published in India, and will probably not hear until some time in November, and maybe not then, as sailing conditions will undoubtedly be greatly affected by the war. We had two birthdays among us lately. The first was that of our oldest grandsonCarl on the 13 and our youngest daughter Florence on the 14th, i.e. to-day

Bonnie and I gave Carl a sweater, and I gave Florence 65₵. So you know now how old she is. Robert is bent on giving up his position in the bank, and would jump at Herman’s job if it should become vacant by his removal to Ottawa. If Herman should go to Ottawa it would mean quite a sacrifice for us, as he pays $ 5 a week board, which helps us out of many a difficult situation that would otherwise prove unsurmountable. But if he gets the call, we will be quite willing to see him go, as it would in all probability mean that he would not have to go over-seas and fight in the trenches. I sincerely hope and pray that none of my boys may have to undergo that torture. But I must close. With love and all good wishes, I am

(I am adding this just to fill out the page)

Little Carl stays at our house during the day, but eats and sleeps at the Clausens. Last week one night he wet the bed. He didn’t want his grand-step-mother to know it. So, what do you think he did? The sheet on which he slept was an old one and thin. So he stuck his finger through it and tore out the wet part and rolled it up and chucked I under the covers at the foot of the bed, so Mrs. Clausen wouldn’t see it. This was quite a trick for a young fellow just turning three years of age, don’t you think? Bonnie thinks it was just the Clausen coming out in him, Carl is a bright lad and cute, but as mischievous as the day is long. This isn’t saying much now, but I mean away back in the summertime. C.H.L. 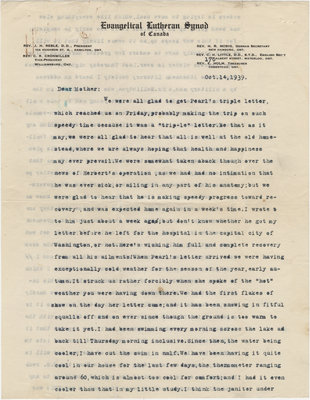