Additional edits handwritten in pen and pencil by unknown source
Notes
William Lyon Mackenzie King (1874-1950) was Canada's longest serving Prime Minister with a total of 22 years (1921-1930 and 1935-1948). King was born in Berlin, Ontario (present day Kitchener) on December 17, 1874. He graduated from the University of Toronto and went on to study economics at Harvard and Chicago University. In 1900 King was named Canada's first Deputy Minister of Labour, and became Minister of Labour in 1909. In 1921 King was elected Prime Minster of Canada. King was a member of the Liberal Party of Parliament for over 30 years, 22 of those years were spent as Prime Minister of Canada. William Lyon Mackenzie King died on July 22, 1950 in Kingsmere, Quebec.

Soon you will have reached another milestone in a long and useful life. No person, in Canada or elsewhere, regrets more than I the circumstance that influenced your retirement. As you have said, you had a job to do; and you did it well. You laid the foundation for a great system of social reforms; and if your immediate successors do not proceed with the superstructure, the foundation at least has been well and truly laid for some future generation.

As I have stated to you on previous occasions I have been fearful for the future of the Liberal Party after you would decide to retire from the leardership; and recent events have not tended to allay that fear. The Liberal Party of today has so far departed from the principles of early Liberalism - principles of truth, justice and righteousness which were established before the foundations of the world were laid, and in which both you and I believe, and have tried to hold intact, that I view the future of the Party with misgivings.

As I look out upon the world today, and recall the severance of your active participation from the sphere of national and international affairs I am sometimes tempted to doubt the wisdom of Providence in permitting time to take its toll of one so capable; but that doubt is slightly weakened when I look back over the years and try to visualize what might have been had any other man been at

the head of affairs in Canada during the troubled times through which we have so recently and safely passed.

I am not a hero worshiper, nor one who worships at the shrine of antiquity; but I do believe in the ultimate triumph of the Trinity of Principles before mentioned. Those principles are good not merely because they are ancient; but they have long endured because they are good; and when we, whether as individuals or groups of individuals, lose sight of them we lose our souls.

During the forty years that have elapsed since first you entered parliament I have read with care every pronouncement made by you on any matter of national or international concern; and only twice in all those years have I felt inclined to disagree with you in any particular; and in one of those instances I felt that what you said was, under the circumstances, the best that could be said in the naticnal interest.

Canada, in common with some other countries, is suffering from mass hysteria as a result of mass propaganda; and our present leaders are doing nothing to allay it; but rather to foment it. The present Federal leader of the Liberal Party is not a Laurier, nor a Laurier type of Catholic. In fact it is the opinion of many staunch Liberals that his speeches on international affairs sound like echoes of the voice of Rome. I cannot avoid feeling sorry for St. Laurent, and particularly for his family. There lives have been spent in the tranquility of the court room, or the home, far removed from the turmoil of politics. The day is not far distant when those Tories who placed a halo about the head of St. Laurent, will replace it

with a crown of thornes; and do it with all the vicious cruelty of which they are so capable.

It is with great pleasure I note that you have regained your health; and I sincerely hope you will long be spared to see the fruit of your labours both at home and abroad.

With best wishes for a joyous Christmas, and the best of everything in the years to come, I remain as ever, 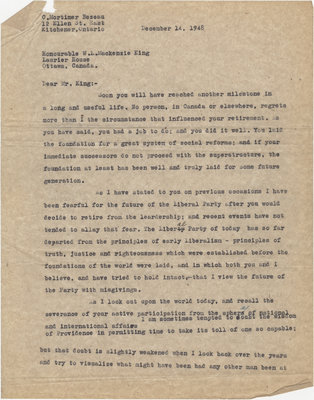