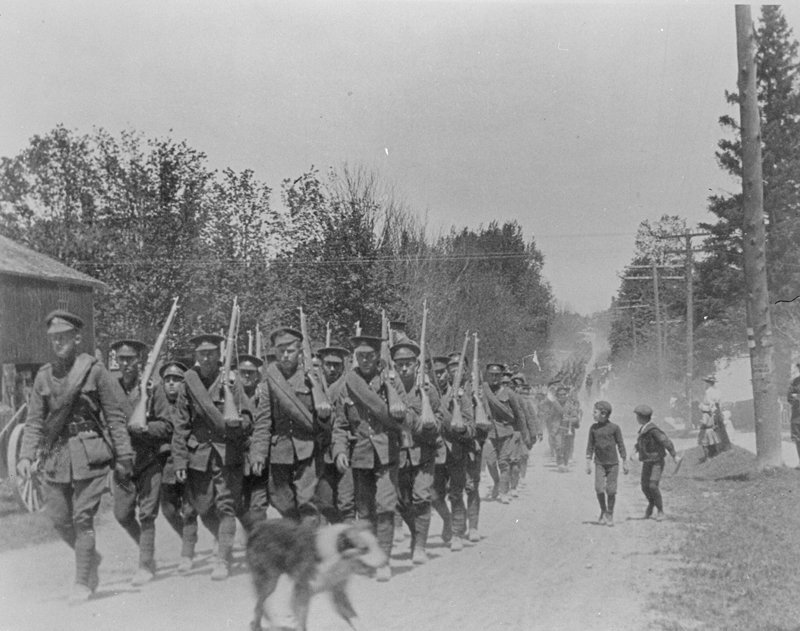 At its outbreak in the summer of 1914, the Great War was expected to be the 'war to end all wars'. Many people expected troops would be home by Christmas. Old notions of respectable, gentlemanly warfare, however, were quickly erased as the First World War became one of the deadliest conflicts in history.

Characterized by trench warfare, the First World War was one of attrition, producing stalemates among opposing forces and contributing to continued fighting which lasted until November 11, 1918. The trench-style of battle led to the introduction of technologically advanced weapons including machine guns, gas, and the tank.

When Britain entered the war on August 4, 1914, so, too, did the British Empire. As a member of the British Empire, Canada was immediately thrown into battle. Some 33,000 volunteers were among the first Canadians sent overseas in October. By the war's end 630,000 Canadian men and women served in some capacity with 420,000 being sent into battle.

The First Wold War would prove to be the bloodiest conflict in Canadian history: almost 61,000 servicemen and women were killed and another 172,000 were wounded.

This exhibit will examine the impact of the First World War on Whitby and will highlight a few servicemen using archival records from the collections of the Whitby Archives and Library and Archives Canada.


Click on the links to the left to learn more.
Main Menu → Next Panel
Powered by / Alimenté par