Creator
J. W. Orr
Media Type
Image
Item Type
Prints
Description
A black and white print of Reverend Vincent Philip Mayerhoffer (1784-1859).
Notes
Reverend Vincent Philip Mayerhoffer was born in the city of Rabb, Hungary, on January 22, 1784. When his father died when he was 11 he went to work as a grocer's apprentice. He was a Roman Catholic and entered the Order of St. Francis at the age of 19. At 23 he was ordained as a priest and from 1807 to 1811 he was curate of several Hungarian parishes. In 1811 he was chaplain of an Austrian regiment sent to aid Napoleon in his invasion of Russia. Reverend Mayerhoffer was captured as a prisoner of war at Dresden and was later present at the capture of Paris. In 1815 he was given a parish in Bavaria. In 1819 he went to the United States to become a missionary in Pennsylvania. After a disagreement with the Catholic Church, he joined the Church of England in 1829 and became a missionary in Markham and Vaughan Townships in Ontario. For 20 years he served in Markham, erecting three churches. He retired to Toronto and lived in Whitby in 1851-52 and 1854-59 where he preached at St. John's Anglican Church. A former Roman Catholic, he became a royal Arch Mason and Grand Chaplain of the Orange Lodge. He died at Whitby on January 15, 1859 and was buried in a Church of England Cemetery (St. John's at Port Whitby).
This print is found in "Twelve Years a Roman Catholic Priest", an autobiography written by Reverend V. P. Mayerhoffer, published 1861. Whitby Central Library and Whitby Archives have copies of this book.
Inscriptions
Bottom of print: V. P. Mayerhoffer
Date of Original
c. 1859
Dimensions
Width: 6 cm
Height: 6 cm 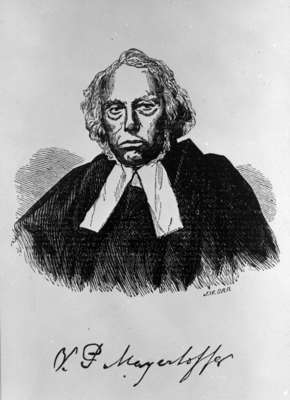