Mystery Question
Can you help us to identify any of the people in this photograph?
[Please answer by clicking on the Comments tab]
Creator
Ruddy, Marjorie Georgina, 1908-1980, Photographer
Media Type
Image
Item Type
Photographs
Description
A black and white photograph of a variety show.
Notes
According to Whitby Courthouse Theatre, the Whitby Modern Players presented many fine plays, notably "Blithe Spirit" and other comedies. However, the group folded and there was a hiatus in theatre activity in Whitby until 1957, at which time the Whitby Theatre Guild (W.T.G.) was born. W.T.G. presented their plays in the auditorium of the old Whitby Town Hall, which in former years was a well-known Vaudeville Theatre where Whitby audiences enjoyed many fine travelling road-shows. The very large stage offered nothing in the way of technical equipment except a row of foot-lights and an antiquated dimmer. 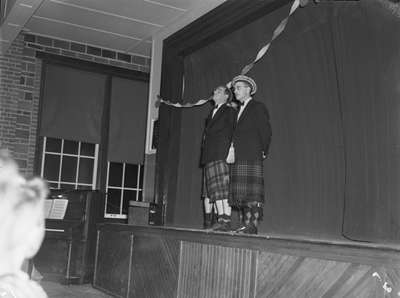