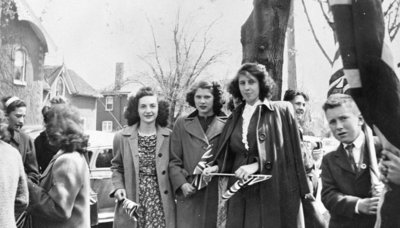 Mildred Thompson, Doreen Loudfoot, and Maebelle Rowley attend Whitby's Victory in Europe Day Parade, 1945. Details
During the Second World War, women entered the workforce in growing numbers. Their services were required for a variety of jobs from serving in the military, working in factories, organizing fundraisers for troops overseas, and providing medical care at the front lines in Europe. Women manufactured parts for airplanes and ships, they worked on farms, joined the navy, army, and airforce, volunteered as nurses with the Red Cross, organized rationing, and led their communities during wartime.

Whitby has many fine examples of women who stepped up to support their county. This exhibit will look at Whitby women in military service, manufacturing, and the community.