The Waterloo 150 project was funded by a grant from the Waterloo Regional Heritage Foundation. Beth Gallagher wrote the profiles with the assistance of many research volunteers. Information for the profiles was gathered from a variety of sources from the community and the Ellis Little Local History Room. Notable sources include the Ellis Little Papers, newspaper clippings, local magazines and books.
Place of Publication
Waterloo, Ontario
Date of Publication
2007
Subject(s)
Mayors
Politicians
Personal Name(s)
Epp, Herb ; Woolstencroft, Lynne ; Halloran, Brenda ; Snider, Jane ; Epp, Jane
Language of Item
English
Geographic Coverage
Copyright Statement
Uses other than research or private study require the permission of the rightsholder(s). Responsibility for obtaining permissions and for any use rests exclusively with the user.
Contact
Waterloo Public Library
Email:askus@wpl.ca
Website:
https://www.wpl.ca/
Agency street/mail address:

Herb Epp is nothing if not one of Waterloo’s biggest boosters. During a mayoral speech in 2006, he was quoted as saying, “I see the Waterloo that our children and grandchildren inherit as the new centre of the universe.”

It’s the kind of optimism that brought Epp back to the mayor’s office in 2003 at the age of sixty-nine. The veteran politician held the post in the 1970s, and re-entered the municipal fray to help the City get over the RIM Park financing scandal.

Epp won a landslide victory that year with nearly fifty percent of the vote. “City administration will begin without delay to start to mend the wounds of the past,” he said after taking office. “We will do so by ensuring transparency, accountability and integrity.”

After the election, Epp acknowledged that his broad victory was due, in part, to a backlash against incumbent mayor Lynne Woolstencroft. She had been mayor for only a few weeks when the details of the RIM Park financing scandal were revealed.

Ironically, the very winds of change that carried Epp into office unceremoniously dropped him during the 2006 mayoral election when newcomer Brenda Halloran soundly defeated him. It was the thirteenth election campaign of his career, and Epp, not a superstitious man, accepted the loss with equanimity. “The public has always been very good to me,” he said. “It’s time to move on.”

Epp, born one of six sons to a carpenter in Winnipeg, Manitoba, moved to Niagara-on-the-Lake with his family when he was seven. His interest in politics was fuelled by his father who read voraciously, and took the young Herb to political meetings where the likes of Liberal politician C.D. Howe spoke. Howe, Prime Minister Mackenzie King’s right-hand man during the Second World War, was also the son of a carpenter.

Epp attributes his entrepreneurial spirit to his mother who, while raising six boys and managing the household, also took odd jobs in a canning factory and did laundry to help make ends meet.

After graduating from high school, Epp came to Waterloo to study history and politics at Waterloo College, now Wilfrid Laurier University. After receiving his BA, he soon began teaching high school and later he completed his Masters of Education at the University of Toronto. In 1967 he married Jane Snider, an elementary school teacher and together the young couple had two children, adopted a third, and Epp’s wife later embarked on a career as a massage therapist.

Epp entered politics early, being elected to City council in 1968. He became mayor in 1974 and was acclaimed in 1976. Epp began a long tenure in provincial politics as a Liberal MPP for Waterloo North in 1977. After retiring from the legislature in 1990, he began working full time as a real estate agent.

Epp, who still enjoys being busy and “getting things done,” resumed his career as a real estate agent after the 2006 defeat. When asked whether he’ll enter politics again, he says, “It’s highly unlikely.”

However, his passion for Waterloo remains a constant in his life. “The fact is that we are extremely fortunate in this city,” he says. “We’re extremely blessed with everything we’ve got here. We must never forget that.” 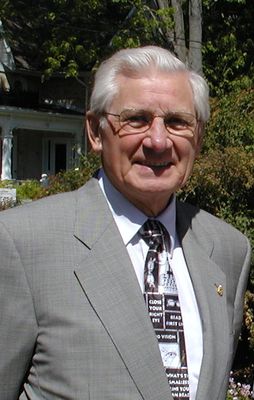