Media Type
Image
Item Type
Photographs
Description
This photograph is taken on the south side of Dundas, looking east over Seventh Line (now known as Trafalgar Road). The photographer is standing in front of the store, gas station and ice cream booth (called Ogden's) owned by Bob Fairman in the 1950s.

The photographer is on the southwest corner of the intersection, in front of the two-storey central building which was the original Post's Inn. Post's Corners was one of the first hamlets in Trafalgar Township. It was located at the intersection of what is now Trafalgar Road (Seventh Line) and Dundas Street, Oakville, Ontario. The Post family owned the land on two corners of the intersection, purchased ca 1806 and 1816, resulting in the village name, "Post's Corners". As of 1858, the hamlet was known as Postville.

Thanks to the research of Michelle Knoll, we know that the Post family built the Post's Inn in 1818 (Lot 13 1 SDS). The stage coach started in the 1820's with 2 coaches running daily from Toronto to Dundas, the village just north of Hamilton. Mail was the primary business of the coaches, passengers as well. Postville being a changing station for the horses, there was also a large stable. A second stable was later added on the north side of Dundas to accommodate up to 50 horses. The Inn was first run by Ephraim Post.

It had 5 fireplaces. There was a shed behind the Inn which stored items of the local militia for military drills. Much local business was done at the Inn. There are records of ward elections taking place there until at least 1852.

For a short time during the temperance movement, the hotel was a temperance hotel. By 1833, coaches were using the Lakeshore road and steamships were running to Hamilton, thus reducing the need for the Dundas stage coaches. When the railway started in the 1840s, the Inn was less important. Son Hiram took over management in 1841. At this time, a two-storey addition was added across the front.

The 1857 Tremaine's map shows the property was owned by Benjamin Thompson. James Young was running the Inn in 1876 when George Baker took over and remained until his death. This complex was owned by Bob Fairman in the 1950s.

This photograph was taken before 1949. Behind the Ogden's ice cream shack, the car and man, you can see the first Trafalgar Township Hall - the brick two-storey building. It faced north to Dundas, running lengthwise down along 7th Line. It was originally built as a store in 1847 when the Dundas Highway was heavily used as a travel route between Toronto and Dundas, Ontario.

When the new 1949 building was erected, it sat on an angle, facing to the intersection. A link to a photograph of the municipal councillors in the new building is provided in this record for your further information as well as a clearer photo of the old building, and another of the store/garage complex. The Hall site is still marked with a plaque describing the hall.

The original served as a community center for the rural population, and hosted dances or other events such as Don and Donna McAlpine's wedding reception in 1953, as well as being the centre of the municipal council. 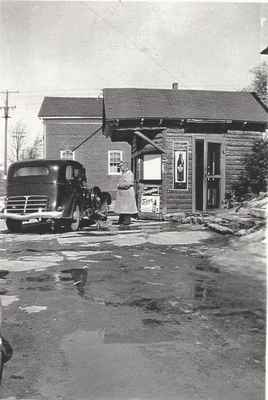