This is a copy of an undated photograph taken sometime between 1857(the first year that John Cooper was in business) and 1881 (the year that Dr. Salter died).

The photographer's imprint, including the logo, appears on the front of the card. There are two handwritten inscriptions on the back. The inscription incorrectly gives his death date as 1875.

In transcribing the handwritten inscription on the reverse, it was unclear whether one of the words was actually "bitterness".
Inscriptions
Front - John Cooper (and) Chromotype Patent Permanent Photograph (and) J&F Cooper sole Licensees for London & Co.
Reverse - Dr. John Salter settled in London in 1835 a chemist first employed by Smith & Moore in the drug department of their business in the ye 1837 or there abouts. Opened a drug store on his own account which business he conducted up to the time of his death. He married in the ye 1838 Miss Wright a daughter of an Army Officer (I think a Capt) by whom he had several children sons and daughters. He was an Englishman highly educated for the times used to write for the local press making frequent latin quotations and with much bitterness (?) and ability. He was first an Episcopalean but having some difficulty with the Bishop (Cronyn) he left that Church and was for many years a member of the Methodist New Connection Church a man highly esteemed as a citizen. Died in about the year 1875.
Reverse - In 1856 City Directory
Date of Original
ca. 1857-1881
Dimensions
Width: 10.6 cm
Height: 16.3 cm 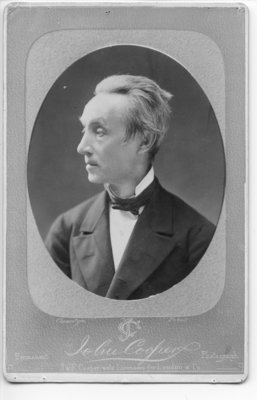