Man's best friend is a dog they say. And Alf Seguin of Mackey, will agree, for it was the barking of his dog that aroused Alf one very cold January morning about 3.00 am. and he fled his home as it went up in flames.

Farewell to a good and faith¬ful servant - and one with a ready wit to boot - when about 100 friends and neighbours gathered at Byeways to honour retiring Township Clerk, Victor McQuestion. Rember his quip? "Today there's a pound of paper for every two ounces of common sense".

February 14 - Valentine's Day and a Party at the Community Centre, Stonecliffe, featuring a "Welcome New Neighbour Night" when 20 new couples to the community were honoured.

Lightning struck and a land¬mark went up in smoke. The well-known Jake E Stewart residence was burned to the ground.

Six hardy area women took to the bush to partake in Depart¬ment of Lands and Forests vast program of planting one million seedling trees, mostly back of Mackey.

Girl Guides at Rolphton, under Captain Dolores Philion marked progress when at the Mother-Daughter Banquet it was revealed that no fewer than 13 girls were well on their way to receiving their First Class Certificates.

Opening of the new OPP Station at Rolphton and all partied up as they celebrated Open House. Breathalyser Test Equipment could be tried, OPP boats and bikes viewed as well as numerous other interesting items.

Who could forget the on¬slaught of the happy Newfies when 90 of them descended on Stonecliffe to replace rails for the CPR? The local pub rocked to the music of their accordion and the thumping of feet, when as many as 20 of them would get up on the floor to dance together. The fact that they lacked female partners bothered them not a bit and their easy going charm soon captivated all who watched, listened or got to know them.

Council of the Townships of Head, Clara and Maria settled on a Mounted Merganser Duck as a prize in a Sailboat Race at the Deep River Jubilee celebrations. The duck was procured from local artist Alma Wallace. Reeve Loretta Boissonneault stood by to make the presentation, but the wind never did co-operate. The race couldn't take place until two weeks after the Jubilee was all over!

Summer. School Out. Sum¬mer camping for young fry, some to hockey schools. Weddings. Swimming lessons. And teenagers taking to the highways. Some looking for work. Most just looking at Canada - in varied costumes and from all corners of the lands. If we took time to talk with them, we learned something and wondered what "generation gap" really was.

One thousand dollars! We all say what we couldn't do with that. What he did with it we don't know, but on a fine summer's day, Leo Philion, a mechanic sub-foreman at Des Joachims received a cheque for that amount from Hydro of¬ficials in the Des Joachims stationyard, for an award winning suggestion.

Teenagers tried a summer Drop-In Centre at Stonecliffe, but the idea eventually dropped through due to lack of interest and teenage co-operation.

Again the Civic Holiday weekend saw many of us enjoy yet another fine display at Meilleur's Bay, by the Uppper Ottawa Valley Arts and Craft Group and their friends. This show, in its fourth year, is becoming an annual "must- see" on our summer schedule.

Summer saw the end of public service for the Township Hall at Meilleur's Bay. The township- owned Laurentian View School, which had been rented by Ontario Hydro as a training centre, became the new Township Hall. The old building was sold to the only bidder, William Kirkwood.

Meetings back and forth. Excited ratepayers and Councillors. Decisions rever¬sed. And finally, the Volunteer Fire Department of the Townships of Rolph, Buchanan, Wylie and McKay got a home - the former McGregor Garage on Highway 17.

September 15 Gus Meilleur of Mackey danced all night and was the male version of Belle of the Ball when he celebrated his 93rd Birthday at a party in his home.

The Community Centre at Stonecliffe was taking on a new face, in plenty of time to show off their new $1200 worth of tables and chairs at the Hunt Dances in November.

On a cold windswept October evening, the boat launching ramp at Mackey was officially opened. Visiting dignitaries offered their congratulations and then all travelled up the highway to enjoy a delicious country meal at the Deux Rivieres Hotel.

Construction companies moved in and work began on the final stretch of Highway 17 to be remodelled - Stonecliffe to Mackey area. Gravel bumps, where the styrofoam was laid, still provide a rocky stretch of travelling, but come next summer

Hunting Season and the an¬nual rounds of visits to hunt camps and renewed friend-ships. Moose seemed to be still more plentiful than deer in the Townships. Probably the luckiest hunter of all was Isabelle Wilson from Rolphton, who won the Draw for the $1,000 prize at the Hunters Ball, Stonecliffe, on Friday Nov 13!

Meeting on land severance and subdivision held in the Township Hall at Point Alexander answered a lot of questions troubling ratepayers in the district. Coffee and doughnuts supplied by the Presbyterian Church ladies were good too!

Election Time - and Promises, Hopes, Rejoicing and Disappointments in both groups of Townships. Reeve Guy duManoir, unopposed, returned to lead his flock for the 15th Consecutive year, while Deputy Reeve, Cecil MacDonald, squeaked in by two votes over his opponent, Mel Stewart.

Further up the highway, in the Townships notorious for hard-fought battles for the Reeve's chair, Art Yates, several times a winner and several times a loser in past years, easily defeated his op¬ponent, Wyman Jennings.

The former Reeve, Loretta Boissonneault, stepped out of public office after a dedicated service as 13 years a Councillor and 2 as Reeve.

Readers who are interested in contributing current items of Township news should telephone Mary Ellen Boudreau 586-2591 or Kay Brown 584-4161. 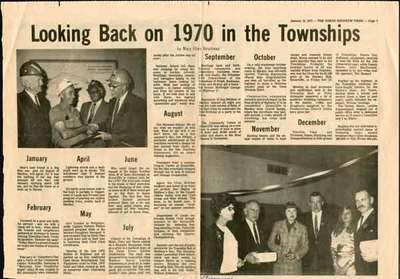