Head, Clara and Maria council has repeated its position that the approved amalgamation of rail lines in the Ottawa Valley should go ahead as planned.

Council passed a resolution last week that responds to environmental groups and the Ministry of Natural Resources that oppose the amalgamation.

The National Transportation Agency has given its approval to a CN-CP plan to consolidate its two main rail lines in the valley. Part of the plan calls for the abandonment of the CP line through North Renfrew in favour of the CN line through Algonquin Park.

The abandonment order is supposed to go into effect at the beginning of July.

But a number of groups concerned about the impact that would have on the park want the government and the federal court to block the approval so that a formal environmental assessment is done.

"We would like things to stay as is," Therrien said of the NTA ruling.

"Council felt it was important to respond," she added. Martelle explained to county council that MNR is concerned about the potential impact increased rail traffic would have on park ecology and the important tourist market that is developing in the eastern section of the park.

On the other hand, increased rail traffic is not something that Head, Clara and Maria council wants in the townships either.

"There are seven unprotected, unsignalled road/rail crossings in these townships and human fatalities have occurred at these crossings in the past," states the resolution.

"Thus, an increase in rail traffic could mean an increase in human injuries and/or fatalities." Council also noted there would be an increased risk of accident or derailment wherever rail traffic increased. In the townships, any chemical spill that might occur would pose a threat to residents, highway users and the Ottawa River.

An MNR survey of visitors to park campsites near the CN line indicated a large number of respondents would not return if there were more trains going through the park. Townships council does not think that is a significant concern, however.

"The inconvenience for a camper cannot be compared to the problems of a permanent resident who endures the railway traffic/noise for twelve months a year as 'it is somewhat difficult to roll up a house and move to another site,'" the resolution states.

Therrien hopes people outside the area will pay attention to the resolution and hear the concerns of a small municipality that is often overlooked by others. 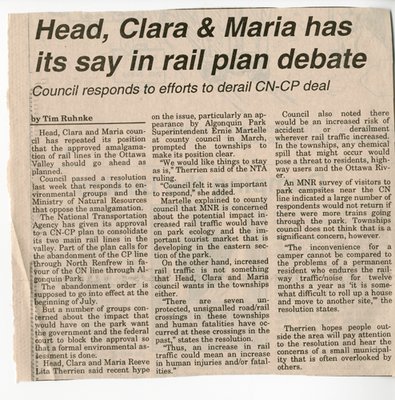