While water levels in the Deep River area continue to be higher than normal, water levels above the area's hydroelectric dam have been abnormally low. The release of water by the Des Joachims dam just before the Victoria Day weekend carried away boats and docks below the dam. But it also pretty much dried up the Ottawa River above it, according to local resort owner Doug Antler.

Antler, owner of Antler's Resort in Deux Rivieres, said his problems were the exact opposite of resort owners farther down the river, who have complained about being flooded out.

"We were sitting here with no water," Antler said. "You have too much water; I don't have any."

On May 17, as the water level at Deep River suddenly rose, Antler's water fell four feet.

"It's just a disaster," he said. "I've had people who would normally come here cancel their reservations."

Antler had to call other customers and tell them there wasn't enough water for their boats.

Ontario Hydro spokesperson Richard Penn said the joint Ontario-Quebec committee regulating the river levels had no choice. Heavy rains in the Temiscamingue area on May 17 and 18 threatened to flood out the town of Mattawa if the dam wasn't released, he said.

"It wasn't as though we were making any money out of that stuff," he said. "All we were doing at that point was minimizing flood damage."

Sudden rainfall could be part of the explanation, Antler admits. But he wonders why the hydro companies allowed the river above Des Joachims to rise to such dangerous levels before the rain fell.

"Two weeks before the long weekend, our water was higher than I've ever seen it," he said.

Low water levels in the Ottawa River have prompted Head, Clara and Maria council to send off a spate of letters to governmental mental agencies wondering what is happening.

Reeve Lita Therrien told coun¬cillors last week she has received six calls from residents who were upset at the state of the water levels.

"People are quite annoyed," the reeve said.

"We're promoting this river as a tourist attraction and we're having this problem." 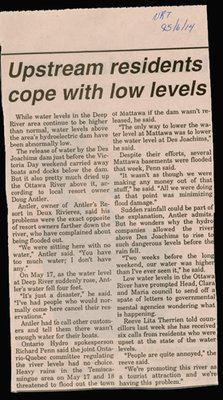