The following historical data on the first post offices in this section of Renfrew County has been recently added to the files of the Ottawa Valley Historical Society by the Curator of the Champlain Trail Museum, Mrs Carl Price.

From the time Champlain sailed up the Ottawa River in 1613, the river was the most utilized route for travel. There was no settlement at Pembroke until 1828 when Col. Peter White arrived in this vicinity, started a clearing and built a home in the wilderness.

Despite the difficulties involved in reaching the new settlement, its growth was fairly rapid; a man named McKay soon built a sawmill on the Ottawa river, near the mouth of the Muskrat. His name was perpetuated in the naming of McKay street, Pembroke.

East of the Muskrat's source, Muskrat Lake, stretches the largest of Renfrew County's townships, Westmeath. The name of this township, organized in 1830, is from an Irish county. A large portion of it forms a peninsula around which sweeps the Ottawa River. On its north side the river expands into Coulonge Lake, on its west into Lower Allumette Lake.

It was not Pembroke, but Westmeath township, a few miles south which got the first post office this far north in Ren frew County. In 1837 Caleb Strong Bellowes, one of the earliest settlers, became post¬master when Westmeath post office was established on his farm at the northwest corner of the 6th concession road and the 10th side road.

In the early 1850's Westmeath post office moved to Goddard's Corners, overlooking Lower Allumette Lake. This village has since been called Westmeath. Previously it had been suggest¬ed that it be called Tuckerville, as George Washington Tucker was one of its earliest pioneers and had owned all the land on which the village was built.

For many years people locally called it Front Westmeath, because of its location.

Mark M. Drew, who had a tannery and shoe store, was postmaster after the war. Then Westmeath post office was moved to the grocery store of Alexander Fraser.

Alexander Moffat built a grist mill in 1841 in Pembroke on the Muskrat River. The same year, he surveyed his property into town lots. The village had been called Miramichi, by settlers from New Brunswick, bur now it was called Moffat for a time, then Sydenham.

Before 1846, mail came from Westmeath, the nearest post office, but in that year a post office was established in Pembroke, named Pembroke after the township of that name. Moffat was the first postmaster and was succeeded in that office by his son and grandson.

The rapids on the Ottawa River in its big bend between Portage du Fort and the Mouth of the Muskrat were avoided by the early lumbermen by taking a more direct route through a chain of lakes which led into the Muskrat Lake and the Muskrat River. The main street of Pembroke began as a portage road.

When David Beach arrived in Westmeath township in 1835 only a trail led to the little settlement at Miramichi (Pembroke), and where this trail crossed a little stream he took up 1,000 acres of land. Beach soon established a hotel, tannery, grist mill and sawmill.

In 1848 he established South Westmeath post office, where the trail to Pembroke crossed the 5th concession. Ten years later it was renamed Beachburg.

For several years the settlers travelled to Portage du Fort, 10 miles south, on the Ottawa River ,on horseback, as the trail was too narrow for wheel¬ed vehicles. The first mail was carried from there on the back of a Mr. Russell. The government had made a survey in 1846 to open a road from By town (Ottawa) to Pembroke. It was completed in 1852 and was call¬ed the Government Road.

The mail then came three times a week from Ottawa to Beaehburg and through Westmeath post office to Pembroke.

A ferry crossed the Ottawa River at LaPasse, on the easterly side of the Westmeath township peninsula. Its earliest settlers came from downstream, towards Montreal, being mostly French Canadians. Its post office was opened in 1852 as Gower Point, although shortly after parish records used the name LaPasse.

Wild geese in their flights were wont to pause there in their flights to and fro in spring and autumn in the cleared marshes and lands, hence the name, "LaPasse" des ouardes. In 1906 the post office name was changed to LaPasse.

As usual, Stafford township west of the north half of West meath, had as its first post office, one named after the town¬ship. Stafford post office was established in 1852 on its eastern boundary road, north of the 6th sideroad. Its postmaster was a farmer, Robert Child er Jiose. Mail came in bi-weekly.

As with all other places northwest of Pembroke, lumbering was its reason for existence. Before World War I, a military camp was established northwest of the village and in 1916 Petawawa Camp post office opened.

1866 saw a post office opened in Renfrew County's northern¬most township, Clara, where a portage of two miles was necessary to avoid rapids on the Ottawa River. This was Deux Rivieres, on the mail route to Mattawa. It was 30 miles up¬stream from Rapides des Joachims and 28 miles from Des Joachims, the nearest steam¬ship navigation point. (The Des Joachims Rapids are about 38 miles west of Pembroke), From Des Joachims there was no conveyance except by canoe, during the winter by sieighs. The postmaster was Robert Ranson, proprietor of the Albion Hotel.

Alice township, west of Stafford township, got its first post office in 1869, when Locksley was opened, on the 30th sideroad in the 2nd concession. Its teacher, William W. Walford, was postmaster. The mail came in twice a week.

In 1870, in Head township, 11 j miles above Rapides des Joachims, was established Rockcliffe, as a sub-post office of Deux Rivieres. Mail came weekly and the postmaster, W. H. Mclntyre, was an agent for lumber merchants.

Where the road from Ottawa leading through Beachburg joined the road from Westmeath near Lower Alumette Lake, in Westmeath township, Perretton I post office was established in 1872. W. S. Field was postmaster.

The Brockville and Ottawa Railway was built to Sand Point, north of Arnprior in 1865, but did not reach Pembroke until 1876, then being known as the Canada Central, The latter, which was to become the Canadian Pacific Railway, was ex¬tended up the Ottawa Valley from Pembroke between 1876 and 1882, its destination the Pacific Ocean, its destiny the linking of a nation.

One of the places it would run through would be Chalk River, but back in 1860 there were already settlers in that section oi Buchanan township. They worked in lumber camps in the winter and farmed the rest of the year. From 1875 when a post office was opened at Chalk River, there was a sawmill in the village. Thomas Field ran a general store with W. S. Rield as postmaster.

At the 5th concession road and 3rd sideroad of Stafford town¬ship, Micksburg post office was opened in 1876. George Mick, general storekeeper was post¬master. It was five miles west of Snake River, the nearest rail way point. Snake River post office was opened in 1880, in Westmeath township, where the road to Pembroke crosses the 3rd concession road.

In Head township, 46 miles northwest of Pembroke, Mac- key's Station post office was opened in 1881. J. C. MacDiarmid, C.P.R. agent, was post¬master. The same year, Wylie post office was established in Wylie township, 27 miles north¬west of Pembroke. It was two miles northwest of the nearest station on the C.P.R. When the Atomic Energy plant was start¬ed at Chalk River in 1944, Wylie became the nucleus of its residential community, Deep River.

Bissett Creek post office was established in Maria township 60 miles northwest of Pembroke, and was also on the railway. First settled in 1863, it shipped timber and logs. The general merchant, Xavier W. Bernier, was postmaster.

In 1887 Davis Mills post office opened in Alice township with Richard Davis as postmaster, on the 7th concession road in lot 25. There was tri-weekly service. The Indian River supplied power for the Davis Mills, eight miles from Pembroke. On the Indian River, at the 11th com session and the 5th sideroad. the Alice post office came into being in 1891. There was weekly mail service.

The only post office in tiny Pembroke township outside of Pembroke itself was Alba, on what is now Highway 17, at the southern boundary road. It opened as Alexander Station in 1893, becoming Alba a year later, in the home of Charles Whitmore. Mrs. Whitmore was postmistress for 17 years. The mail bag was tossed from the train at Government Road crossing a mile northwest and brought to Alba by a mail car¬rier, who continued on to Perretton.

Mystery Question
Does anyone know when this was publishedÉ
[Please answer by clicking on the Comments tab]
Creator
Mrs Carl Price, Author
Media Type
Text
Item Type
Clippings
Description
The early history of Renfrew County is traced via the First Post offices and the railway. 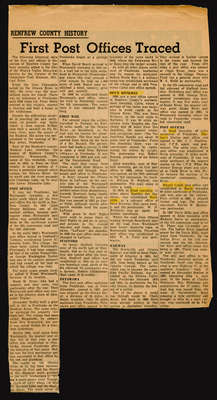 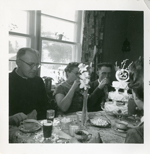