In the year 1850, this place now known as Mackey, then known as Mount Pleasant was in the Lauds of lumber Company’s O'Meara and Murray s being about the first to come in. They first purchased the land from the Government and had it deeded in their name. Those Company’s put in camps to make square timber of the largest of the bush. This square timber by hauled to the Ottawa River then forwarded by rafts to market. A few years later some of the men who worked for the Lumber Companies purchased the land from the Company’s and settled on them to begin farming, thus originating the pioneer farms of Mackey. The first settlers of Mackey were of mixed nationality some were descendants of Irish and Scotch immigrants - also a few were French. Those fine people haved their clearances of the forests using the timber to make their homes which were flat roofed shanties with the timber being used as roofs as well as walls. These peoples cleared their farms with the aid of oxen as horses were too expensive and not so useful for that work.

The land was cultivated by them with crude handmade ploughs. Seed had to be sown by hand as also had to be harvested and threshed by hand. One main difficulty was poor ways of transportation as all supplies had to be brought in by boat to the Hudson Bay store which was then located at Des Joachims where now the important Hydro project is in the last stage of construction. These conditions remained much the same for a number of years until they were improved by the use of a small steam boat known as the Jason Gould which operated on the Ottawa River from Rapides Des Joachims to Roche Captain a distance of about twenty five miles. At this time there were no roads except wagon trails except in winter where they traveled on ice in rivers and lakes. The settlers had to get in yearly supplies during this time.

About 1880 the Canadian Pacific Railway was built and ran through the country opening it up and bringing in new settlers. A Mr. Billfir opened an hotel in the village which comprised of a few others who worked for the rail road later the hotel was taken over by a Mrs. Bennet and later by Boss Mackey. Thus Mackey got its name.

As the country became more settled a log school house was built about a quarter of a mile from the village. The first teacher was a Miss Kate Foraw from Eganville. Many years later a niece Mayme Foraw taught the grandchildren of the former Miss Foraw's pupils. The mail was then brought in by train. The Post Office located in the village. A General Store was also kept by Mackey who a few years later sold all the land around to James Dunlop who had been living at what was known as Brumms Hill.

Among the first pioneer settlers were Donnelys, Conways, Dowdalls, Dunlops, Gegears and Andersons. A few years later John French settled near what was known as French's Lake.

About seven miles from there a cluster of new settlers located in what was known as the Hardwood the name being taken form the Hard Maple Forest. They were the Gareaus, Jennings, Tallons, Dohertys and Malbeauf. They farmed in the pioneers way with handmade tools. As time went by roads became opened and haved less hazardous. The majority of the population being of the Roman Catholic Faith a Church was a necessity and through the generosity of the pioneers a subscription was started by Father Simonette the Parish Priest the non Catholics helping as well as the Catholics. About the year 1890 a Church was started the land for it and a cemetery being donated by James Dunlop. The work was mostly all done by the settlers themselves Father Simonette being both architect and carpenter. More people were setline around the men being employed by the lumber firms who were still doing a lucrative business which helped the farmers a lot as they worked in the bush during the winter months.

As the years went by the people improved their building bought better machinery with which to work their land some of the more prosperous had covered buggies and light horses for driving. They also invested in a more modern threshing machine which was a great improvement over the flail.

In 1902 the railroad Station was burned to the ground. A new one was erected which served its purpose until 1947-8 where the Hydro Elective River Commission bought all the land lying along the Ottawa River where the buildings were demolished.

In 1928 the Old Red School House (which long ago replaced the little log school) was replaced by a modern stucco building which in its turn served the Community, until it too was replaced by a new modern school by the Hydro Electric Power Commission.

In 1920 Mr. N Haberer of Lowville New York purchased the Dunlop farm, which he held until the Hydro Electric Power Commission bought it. In 1932 the new Trans Canada Highway was built through this community helping the county in many ways bringing in tourists from other parts of Canada and the U.S.A. also bringing the cities and towns closer to our doors. Opening markets for farm products, beef and milk. By this time the farmers were investing in better live stock building up good herds of beef and milking strains.

In 1946-47 the Hydro Electric Power commission which had been negotiating with the residents for some time finally came into the county, there was hardly one farmer who was not affected by this big project, some were bought out entirely while others had only parts of their farms taken over. The whole village, including the Catholic church which was on a a hill was also within the area to be submerged. The trans Canada Highway and C.P. railroad had to be moved to higher ground. Some of the residents moved out altogether but quiet – a number built new homes along the newly built highway forming a small community comprising of farm homes school house, post office, small store, a number of tourist cabins and private dwellings. This transition from scattered farms to a community more closely settled has created a spirit of neighbourliness which has been lacking where people lived farther apart. This little community is supplied with electricity thus bringing to the people every modern convenience. With the colonial coach lines operating daily the public have access to doctors, dentists, good shopping facilities right at their doors. High school students can avail themselves of those advantages as they can attend classes in Pembroke as a school bus operates daily thus giving the present generation an education which their fore fathers had to forgo.

The ownership of those pioneer farms has changed hands several times only one family still lives on the farm which over a century ago was deeded to Mrs. Donnelly whose grandson works this Pioneer Farm with its modern machinery etc.


This was written and compiled by

with the assistance of 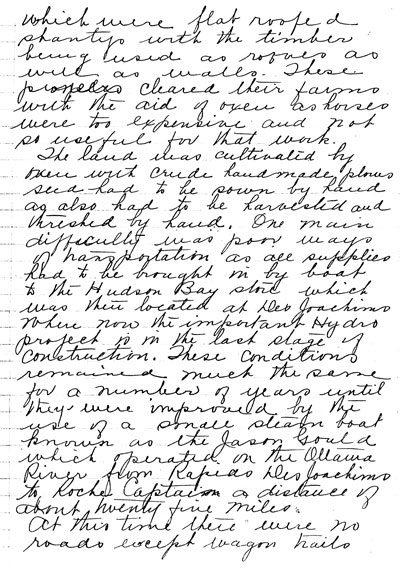