This photo has been around for awhile and I don't make any claims at ownership, but it coincidentally shows several houses where my family and relatives lived in Port Arthur.

This is Cumberland Street North and the narrow cross-street in the middle foreground is Egan Street.

The house whose front porch is just visible along the right edge of the photo is 319 Cumberland. Several of my Swedish ancestors seemed to stay in this house for a time. I have two more photos of this house but can't identify the people in front of them with any certainty.

The next house along the right side of the photo, just across Egan, is 321 Cumberland, built by my great-grandfather Olof Olson between his immigration to Canada in 1904, and when it shows up on the fire insurance maps made in 1908. Although his wife Maria died in 1910 from Addison's disease, he lived here until his death in 1941. His daughter Emma lived here until she got married and immigrated to the US but his other daughter Esther - my grandmother - stayed after her marriage to my grandfather, Stephen Wilfred Gallant, and they raised their five children here.

The next house past 321 is 323 Cumberland. It was owned by Mary Anderson (born Maria Carolina Sundberg), a widow whose husband Gurt may be the Gurt Anderson who was killed in a dynamite explosion while working on a bridge in Fort Frances in 1901. Mary Anderson turned her home into a boarding house, catering to Scandinavians.

In 1910, Johan Albin Thompson and Maria Elizabet Friberg lived in Mary Anderson's boarding house. Maria Elizabet was the niece of Olof Olson's wife Maria (who had just died a few months earlier). The following year, for the 1911 census, Johan 'Albin' and Maria 'Mary' Thompson had moved to 350 Cumberland North. In the photograph, this is likely the small white house on the left side of the street with the laundry hung out. It's just a guess, but I don't see another house that could be numbered 350.

Except for Olof Olson and his daughter Esther's family, the rest of the Swedish relatives all made their way to Seattle or Preston, Washington. Preston was a mill town east of Seattle, started by disenfranchised Swedish Baptists. It became a destination for many of them. 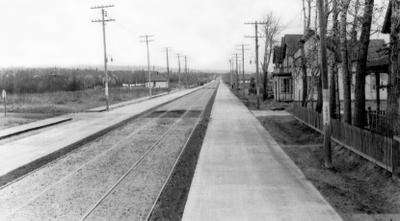