Five Oaks is located at the intersection of the Grand River and Whiteman’s Creek in the traditional territory of the Onondaga, and served as a meeting place for Indigenous communities for generations. The property was included in the Haldimand Proclamation, which granted six miles on either side of the Grand River from its mouth to its source to the Mohawk of New York State after they were pushed from their traditional territory after the American Revolution. Following the 1837 Rebellions, brick manufacturing and brewing took place on the property. In 1935 Camp Thayendenagea (named for Joseph Brant) was created, and was later sold in 1946 to the United Church of Canada, which used the property as a work camp. In 1952 Rev. Mr. Bev Oaten established the Five Oaks Church Camp, which operated until the 1960s. Today, Five Oaks is an interfaith/intercultural education and retreat centre affiliated with The United Church of Canada, Six Nations, and the Muslim community, with plans to expand these partnerships. Local small businesses now also make Five Oaks their home base for their operations.

This land serves as a meeting place for members of local Indigenous communities because the place where two rivers meet is considered sacred. Archaeological evidence from a 1990 excavation suggests that the Onondaga have occupied this land since at least 8000BC.1

The Attiwandaron are driven from their home in New York State by the Senecas and create a settlement called Andrachoch at the mouth of Whiteman’s Creek.1

The Attiwandaron are driven out of Andrachoch by conflict between the French-allied Huron and the British-allied Iroquois, and the area becomes a hunting ground for the Mississauga.1

With the Haldimand Proclamation, Sir Frederick Haldimand grants land, six miles on either side of the Grand River from its mouth to its source, to the Mohawk of New York State after they are pushed from their traditional territory after the American Revolution. This land grant serves as a gesture of thanks for the Mohawk’s support of the British in the American Revolutionary War.1

Major Arnold Burrows is given 1000 acres of land, including the Five Oaks property, as thanks for his service to the government during the Rebellions of 1837.2

Brick ovens are installed at the foot of the hill near the river flats, and clay from the Grand River is used to create bricks, which are then used to build Central School East in Paris.1

1908 – Bixel Brewery is established at the mouth of Whiteman’s Creek.1

Camp Thayendenagea (named for Joseph Brant) is founded. A dam is installed in Whiteman’s creek to create a swimming hole.1

The camp is purchased for $2500 by the Ontario Religious Education Council of the United Church of Canada and put to use by the Boys Work Board, a work camp that was part of a post-WWII movement to encourage young people to work together despite differences.4

Rev. Mr. Bev Oaten establishes the Five Oaks Church Camp.1 The name Five Oaks comes from the Five Conferences of the United Church and the ancient oak trees found on the property.2

1953 - House of the Interpreter built

The House of the Interpreter is completed.2 This building is named for John Bunyan’s Pilgrim’s Progress, a Christian allegory in which a Christian pilgrim goes on a journey, during which he encounters The Interpreter, whose House serves as a rest stop for travelers where they see pictures and dioramas to teach them how to live the Christian life.

New Hall and Wing C are added to the House of the Interpreter.2

The Chalet is completed and the fireplace contains a stone that came from the Parliament Buildings in Ottawa.2

A fountain is constructed behind The House of the Interpreter in memory of Rev. Mr. Bev Oaten.6

London Conference gave a generous loan and gift to Five Oaks to help pay down a large outstanding debt.6

The Labyrinth is installed on the lower campus, and is used for walking meditation.5

The fireplace in the House of the Interpreter was completed in 1953 and contains bricks that have been exchanged with other organizations, including:

The property has the remains of the foundation for a small building, believed to have been the farmhouse of the Potruff Family, who had lived on the property as early as 1863. In the 1950s or 1960s, a fountain was installed with a modified crest of the World Council of Churches. The remains of the ship crest are still on the property today, though the fountain is no longer operating. The four directions garden is an intercultural representation of an Ojibwe medicine wheel and the Christian corss. The medicine wheel represents the Seven Stages of Life and the Seven Grandfather teachings. The centre of the wheel represents the self, and the four sections of the wheel point in the four cardinal directions. The fountain in the centre of the garden was installed in 1970 in memory of Rev. Mr. Bev Oaten. The stone fireplace in lower building dining hall has the original Camp Thayendenagea logo underneath the Five Oaks logo. The labyrinth found in the open green space in the lower campus was installed in 2011. In the Christian tradition, the labyrinth is intended as a substitute for a pilgrimage to the Holy Land. Those who could not travel to Jerusalem could instead walk the path of the labyrinth and meditate on their prayers. The labyrinth at Five Oaks is used today in walking meditation, where one can follow the paths and focus on a question they are contemplating. The fireplace in the Chalet contains a stone from the Parliament buildings in Ottawa, which were undergoing renovations when the Chalet was being built. Rev. Bev Oaten asked a friend to obtain something from the Parliament buildings to insert in the fireplace. 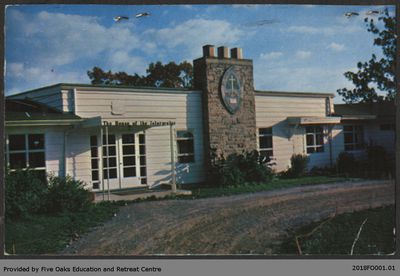