The Scotland United Church, located at 10 Church St W, Scotland, was built circa 1850. It was originally known as the Congregational Church and began with the congregation meeting at the local school house in 1835. The Congregational Church was founded by Reverend James Nall. The white frame building was erected in 1847 and was completed under the direction of Reverend William Hay. The first service happened in 1849 and many celebrated the official place of worship. Many upgrades and additions have taken place throughout the years. To this day, the large Gothic style structure is hard to miss with its tall spire.1

1848 - After many delays in the building of the church, it was completed when skilled craftsman were available to do the final work1

They wanted pure Gothic windows and waited for a long time for them to come from the USA.

Probably 1859 as that appears to be when the bell was dedicated. The bell rung three times a day (morning, noon and night). Judge W.S Walker was the first official bell ringer of the church and earned 24 dollars a year.

1871 – Church was renovated and new seating was added1

Choir space was added. Work was completed in September.

1871 – Church was re-papered and redecorated by Mr. Noble1

???? - Scotland United Church took a strike in its steeple1

The shock waves rang the bell which alerted the Scotland residents of the fire and were able to extinguish it before any real damage happened.

1915 – Windows were re-frosted and woodwork regrained1

The ceiling is mentioned as “metallic” work including papering and outside painting done by Noble & Son. Tower found unsafe and was repaired by Ripley & Son.

1916 - Basement under church with plastered walls1

This gave way for the present hall to be built in 1954.

He was ordained in January 18, 1848 in Scotland. He saw the completion of the Scotland Church building. He spent his entire ministry in the Scotland and Burford Congregational Church, serving a total of 47 years until 1894.1

This Gothic style church was built in 1850. It is a white clapboard building. The church has a single, centre spire which was added circa 1859. It has two 14-grid Y-tracery lancet windows at the front. The windows were special ordered from the USA and took a long time to come to Scotland, Ontario. After many delays, the church was finally completed in 1848.The front has a double door with 8 panels on either side with a lancet arch above it. It has three shuttered blind windows on the tower. The left side has three large Y-tracery lancet windows. The back has a small lancet window. The right side has three large Y-tracery lancet windows equal to its left side. The addition to the church is also white clapboard and features a plain non-windowed door with an arched transom. The windows are two over two sash windows with mullions. Each panel has 8 grids. 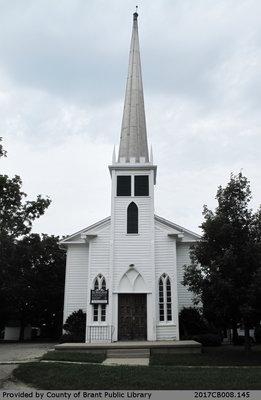