Creators
Bialas, John, Author
Bialas, Katherin
, Recipient
Media Type
Object
Text
Item Type
Correspondence
Description
Cablegram printed on paper with blue ink, with a header in red and navy ink reading: "The All British Cable Route ANGLO-AMERICAN CABLEGRAM ESTABLISHED 1866 DIRECT CABLE SERVICE between THE DOMINION OF CANADA and EUROPE", flanked by two squares describing the service. Below the header, it describes that it was, "Received at Cable Office, 140 Notre Dame St. West, Montreal. Tel. MArquette 4241[star] (Always Open)." The cablegram was sent by John Bialas to his mother, Katherine Bialas living in Brantford, Ontario, to announce his safe arrival overseas in England on 20 February 1943.
Notes
John Joseph Bialas, the eldest son of John and Katherine (Serdersky) Bialas, was born on 7 May 1921 in Brantford, Ontario. He attended St. Basil’s Separate School and was a member of the St. John the Baptist Ukrainian Catholic Church. He was one of Brantford’s best known young hockey players, playing for St. Basil’s, the Brantford Lions Club Hockey Team in 1940-1941, and the following year, on the Akron Clippers team in Ohio as a left defenseman. His love for the sport was apparent as he took his skates with him overseas. He worked at the Universal Cooler Company of Canada, Ltd. in Brantford, with “tin smith and acetylene welding” listed as his trade on his enlistment papers. Other service records note that his most recently employment was at Ford Motors Co. in Windsor, Ontario as a Drill Press Operator, for two months prior enlistment. 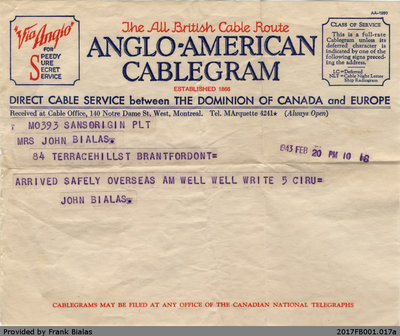