Creators
Bialas, John, Author
Dancavitch, Mary
, Recipient
Media Type
Object
Image
Text
Item Type
Correspondence
Description
Airgraph photographic print on paper in black and white, sent by John Bialas to the house of his mother, Katherine Bialas in Brantford, Ontario, but addressed to his sister, Mary Dancavitch. The airgraph is dated 19 February 1943. On the top right corner of the letter includes John’s service number, B127617, and his current location as with the No 5 CIRU (Canadian Infantry Reinforcement Unit) with the Canadian Army Overseas.

Airgraphs, also called Victory Mail, were invented during the Second World War in England. They were letter that were written on a specific designed letter, and then microfilmed (photographed as negatives), to reduce the amount of space and weight in shipping. The letters were enlarged once they arrived overseas, printed on photographic paper, and then sent to the addressee through the regular post.
Notes
John Joseph Bialas, the eldest son of John and Katherine (Serdersky) Bialas, was born on 7 May 1921 in Brantford, Ontario. He attended St. Basil’s Separate School and was a member of the St. John the Baptist Ukrainian Catholic Church. He was one of Brantford’s best known young hockey players, playing for St. Basil’s, the Brantford Lions Club Hockey Team in 1940-1941, and the following year, on the Akron Clippers team in Ohio as a left defenseman. His love for the sport was apparent as he took his skates with him overseas. He worked at the Universal Cooler Company of Canada, Ltd. in Brantford, with “tin smith and acetylene welding” listed as his trade on his enlistment papers. Other service records note that his most recently employment was at Ford Motors Co. in Windsor, Ontario as a Drill Press Operator, for two months prior enlistment.

References:
1. Canadian Soldiers. “Italian Campaign.” Accessed 28 February 2017. http://www.canadiansoldiers.com/history/campaigns/italiancampaign/italiancampaign.htm.
Inscriptions
Dear Mary,
I'm on a 9 day leave now up in Glasgow just got here and expect to have quite a time. Expect to see Cliff Percival to-morrow I telegramed him to come up. This is quite a place after all. I thought I wouldn't care for it but its alright over here. After about four days on this leave I think I'll go to London I was there on the way up and saw Piccidilly square its about exactly as you see it in pictures. Well I think I'll be off I'll write in a couple of days though or after the leave is over. Cheers, ha ha
So Long Sis
John
Date Of Event
19 February 1943
Subject(s)
Military
Cameron Highlanders of Ottawa
Westminster Regiment (Motor), R.C.I.C.
Second World War
Personal Name(s)
Bialas, John ; Dancavitch, Mary
Local identifier
2017FB001
Language of Item
English
Geographic Coverage
Donor
Frank Bialas
Recommended Citation
Airgraph, John Bialas to Mary Dancavitch, 19 February 1943, Frank Bialas. 2017FB001.016.
Terms of Use
The information and images provided are for personal research only and are not to be used for commercial purposes. Use of this information should include the credit "County of Brant Public Library."
Contact
County of Brant Public Library
Email:digitalhistory@brant.ca
Website:
http://www.brantlibrary.ca/
Agency street/mail address:
County of Brant Public Library (Paris Branch)
12 William Street
Paris, ON
N3L 1K7 | @brantlibrary 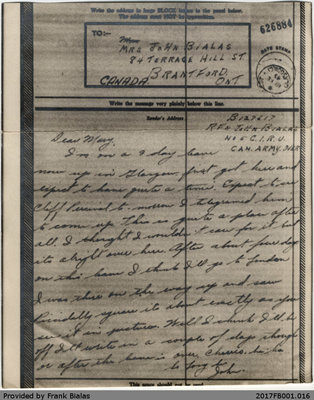