John asks Mary to tell their mother to stop worrying about him because he wanted to join the war effort. He mentions local friends who have also enlisted, and discusses playing hockey with other soldiers and his related knee injury.
Notes
John Joseph Bialas, the eldest son of John and Katherine (Serdersky) Bialas, was born on 7 May 1921 in Brantford, Ontario. He attended St. Basil’s Separate School and was a member of the St. John the Baptist Ukrainian Catholic Church. He was one of Brantford’s best known young hockey players, playing for St. Basil’s, the Brantford Lions Club Hockey Team in 1940-1941, and the following year, on the Akron Clippers team in Ohio as a left defenseman. His love for the sport was apparent as he took his skates with him overseas. He worked at the Universal Cooler Company of Canada, Ltd. in Brantford, with “tin smith and acetylene welding” listed as his trade on his enlistment papers. Other service records note that his most recently employment was at Ford Motors Co. in Windsor, Ontario as a Drill Press Operator, for two months prior enlistment. 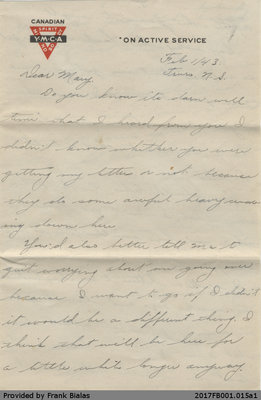