2017EG001.045.73: Black and white photograph of Mary Tate in Yarmouth, Nova Scotia between June 1941 and June 1942. She is wearing a Royal Canadian Air Force Women’s Division No. 5 service dress uniform of a jacket with a leather belt, an A-line skirt, and the “old pie crust” with a Red Cross cap badge. She stands beside an ambulance car, with a brick building in the background.

2017EG001.045.76: Black and white photograph of Mary Tate, presumably in Yarmouth, Nova Scotia between June 1941 and June 1942, when she locally drove an ambulance to assist the war effort. She is standing with her hands in the pockets of a long coat with a belt, and is wearing a Royal Canadian Air Force wedge cap. In the background to the right, there is a Royal Canadian Air Force British Commonwealth Air Training Plan sign, flanked by buildings on both sides, and a powerline to the left.

2017EG001.045.80: Black and white photograph of Mary and Jack Tate on their wedding day that took place in Ayr, Ontario at the Welsh homestead on 20 July 1940. Jack is wearing a dark jacket and light-coloured pants, while Mary is in a long, light-coloured gown and veil, and is holding a large bouquet of flowers. The couple stands outdoors in front of shrubs and trees.
Notes
The first daughter and one of four children of James and Janet Rosana “Rosie” Welsh, Mary Kathleen was born on 24 February 1914 in Ayr, Ontario. After growing up and attending high school locally, she graduated from Normal School, and taught at a one-room school.

On 20 July 1940, she married John “Jack” Chapple Tate of Paris, Ontario on the front lawn of the Welsh family home on Piper Street in Ayr. After their marriage, the couple lived at 78 Sheridan Street in Brantford, Ontario.

On 22 July 1940, Jack enlisted in the Royal Canadian Air Force, and trained as a Wireless Air Gunner. He was sent overseas from June 1941 to June 1942, where he served with the No. 407 “Demon” Long Range Patrol Squadron under the Royal Air Force Coastal Command. The Demons’ mission was to strike enemy shipping, and Jack personally took part in 43 operational flights, and his immediate crew was credited with destroying four ships in six attacks. Of the 54 Canadian members of the 407 Squadron to serve overseas during the Second World War, Jack was one of seventeen to return home.

While Jack was serving in England from 1941 to 1942, Mary taught in at a one-room school in Middleport. When Jack returned to Canada in June 1942, he was stationed at Yarmouth, Nova Scotia, training as a radio officer. Mary moved to Yarmouth to join her husband, and she drove a military ambulance to assist the local war effort.

Flying Officer Tate was temporarily based in Mont-Joli, Quebec on an anti-submarine patrol in the St Lawrence Valley, when he and his three crewmembers were involved in a fatal accident on 14 October 1942. Tate was brought home and buried with full military honours in Paris, Ontario.

At the time of Jack’s death, Mary was pregnant, and she returned to Brantford and worked at the Cockshutt Aircraft Division making aircraft parts. After the birth of her daughter in April 1943, she purchased a house in Brantford, where she took in borders.

After V.E. Day [5 May 1945], her younger brother, Bob Welsh, came to live with her in Brantford, and helped raise his niece for the next thirteen years. Bob served in the Royal Canadian Air Force servicing aircraft, and was stationed in York, England during the Second World War. 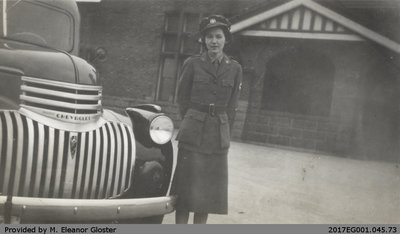