Telegrams on paper, printed with black ink, with the message typewritten in black ink. Dated between 14 October to 25 October 1942.
Notes
John “Jack” Chapple Tate was the youngest of three children of George R. and Gertrude Louise [Chapple] Tate, born in Paris, Ontario on 19 January 1911. He grew up at 79 Walnut Street, and attended Paris Central Public School, Paris District High School, and St. James Anglican Church. His sister Lucy Margaret Tate was a teacher at Paris Central School, and his brother George R. Tate was a foreman at the Gypsum, Lime & Alabaster plant in Caledonia. 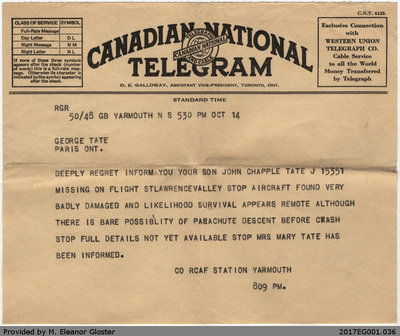