Creators
Tate, John, Author
Tate, Margaret
, Recipient
Media Type
Object
Text
Item Type
Correspondence
Description
A handwritten letter in black and navy ink on paper with the Royal Canadian Air Force crest in blue at the top of each page, with an associated white envelope. Content is only written on the front side of the paper. Sent by John “Jack” Chapple Tate to his sister Margaret Tate in Paris, Ontario. The letter was sent from King’s Lynn, Norfolk, and is dated 25 May 1942. In the letter, Jack describes the loss of his friend James Waldron “Wally” Creeden who died in a flying accident. Wally was a pilot also from Paris, Ontario, who served in the same squadron as Tate overseas.

Tate and Creeden served in the Royal Canadian Air Force with the Royal Air Force 407 “Demon” Squadron overseas in England during the Second World War.
Notes
John “Jack” Chapple Tate was the youngest of three children of George R. and Gertrude Louise [Chapple] Tate, born in Paris, Ontario, on 19 January 1911. He grew up at 79 Walnut Street, and attended Paris Central Public School, Paris District High School, and St. James Anglican Church. His sister Lucy Margaret Tate was a teacher at Paris Central School, and his brother George R. Tate was a foreman at the Gypsum, Lime & Alabaster plant in Caledonia.

Dear Margaret
There is very little I can write about the loss of Wally Creeden. It was just tonight that I received your telegram asking for particulars and at least will write what should get through.

I was on leave in Cardiff when our squadron made its biggest strike yet on enemy shipping. I remember reading in the paper and also hearing over the radio of our successes and also of our losses. These were fine aircraft missing. Immediately I thought of Wally and I must admit that it was not a cheerful thought that he might have been in one of them. I tried to think that with all

his experience he would have come through it safely.

It was not until I returned to the station that I learned what had really happened. Wally was one of them. He had returned almost to the landing field when his aircraft crashed. A message had been received from his aircraft that they were shot up and that is about all I can say about it Margaret.

I do hope that what little I have said will get through the censors and you can let Mrs. Creeden know of what I have said. Two more of the boys will be writing to the Creedens and I also will write to them.

Wally had been with the squadron since it was formed

and was one of its best fliers. His loss is felt quite deeply by all of the boys who knew him and particularly by those of the old squadron who knew him so well. It is more tragic that he was only 20 yrs. old and the youngest pilot and the first to win the DFM [Distinguished Flying Medal] on our squadron.

Received a letter from you today Margaret and also 300 cigarettes a few days ago. I need not mention my appreciation. You already know of it. Please thank the Creedens for giving Wallys parcel to me but it is unlikely that I will be with the squadron when it gets here. You can tell them that it will be divided up among Wallys friends.

Believe I wrote you from Cardiff

that I was having a very good time there. Mary Pike is quite jolly. We had a good time seeing the city together. Mrs. Pike is very nice too and could not do too much for me. It was the best leave I have had over here. Did I thank you for the pictures you sent Margaret. If not I thank you now. I was very glad to get them old girl.

Give my best wishes to Dad and I must close now.

P.S.
Have no fears about your operation Margaret. You will certainly leave the hospital much happier than you will go in. Please bear that in mind for your first few days there and the very best of luck to you.
Jack 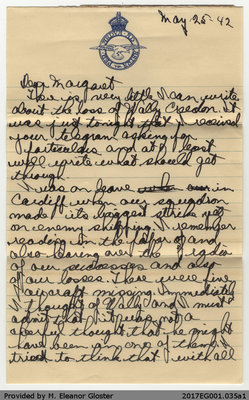