Creators
Tate, John, Author
Tate, George R.
, Recipient
Media Type
Object
Item Type
Correspondence
Description
Handwritten letter in black ink on paper with an associated envelope sent by John “Jack” Chapple Tate to his father George R. Tate in Paris, Ontario. In the letter, Jack describes that he is currently in the south of England, although does not specify. Notice the lack of a postage stamp, suggesting it was military mail, paid for by the Royal Canadian Air Force. The letter is dated 27 February 1942. At the time, Jack was on leave while serving in the Royal Canadian Air Force as a Wireless Air Gunner with the Royal Air Force 407 “Demon” Squadron overseas in England during the Second World War.

On the bottom third of the letter, there is a line cut out, indicating the Great Britain postal censorship.
Notes
John “Jack” Chapple Tate was the youngest of three children of George R. and Gertrude Louise [Chapple] Tate, born in Paris, Ontario on 19 January 1911. He grew up at 79 Walnut Street, and attended Paris Central Public School, Paris District High School, and St. James Anglican Church. His sister Lucy Margaret Tate was a teacher at Paris Central School, and his brother George R. Tate was a foreman at the Gypsum, Lime & Alabaster plant in Caledonia.

Dear Dad,
Hello dad. How are you? Hope you are fine. Have received a couple of letters from you and was glad to get them. Just now we are in the south of England and we are not on operations. Just having a well earned rest while new crews are being trained. Don’t expect to be down here more than a couple more weeks and where we will go then and what we will be doing I have no idea.
For the last six months we were doing some pretty hot work. It was just about as tough as it possibly could be. When we moved down here there weren’t very many of the old gang left. […]
Please tell Margaret that I have received another parcel from her. It contained a comb, mirror, shaving cream and a lot of very useful

articles. They were very much appreciated. There are a lot of things we can’t buy over here and parcels from home are very nice.
Was interrupted in writing for a while. Some of the boys were in. Have visitors nearly every night. The attraction is an electric heater which the boys can use to make toast. Bill McLeod got it from somewhere. Bill & I have a room together. Before coming here he flew from New Foundland since the war started and has 600 operational hrs. He shadowed the Bismark when it was in the Atlantic.
Better close now and get some sleep. So good night. Hope you are all well. […].
Sincerely
Jack
PS
How is George? Haven’t heard from him for quite a while.

“EXAMINER 7979” printed censorship label in black lettering glued to the front, indicated it was inspected by postal censorship officials. 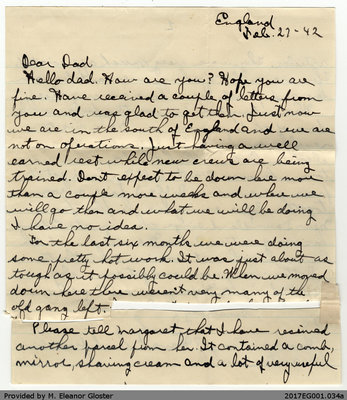