Dear Margaret & Dad,
Received your call yesterday and was glad to hear that everything is fine at home and you are all well. Wrote to you more than three weeks ago but will write again before hearing from you as it takes so long for a letter to get there and back.
Getting along fine here and enjoying life. The boys were given 10 days leave but I didn’t take it. There were 11 of us who stayed & started on the course. Am doing OK with it but for taking code I am slow at that but will

[…] months and then to another school for […]. The wireless course is the longest of the three and I think it is the most worth learning. Any one can fly a plane if they have a little nerve and flying is about all some of the pilots know. Don’t ask me how they get through their exams. You will likely know Observers, unless they are exceptionally clever get through in the same way. A wireless operator just can’t get away with very much. Most of our exams are oral and we must know our instruments to operate them and make repairs. We have to be able to take code

or we would have failed out stations & air operating where we have to defend on our selves. Of course taking code is half the job and for some of us it is very difficult to do. But we will do our very best to make it and if we don’t we will most likely get into some other job in air crew.
You very seldom read of the wireless gunner in the papers and yet he has the longest course and I think the hardest. The wireless operator receives the orders in code after the plane leaves the ground. He contacts all planes overseas, he gets

wireless could be so important in an aircraft or that the […] was so […] about it. All the more reason we should want to get it.
Must close now and make a few rounds to lock some doors & put out some lights. I am orderly sergeant tonight, a job we all get for one day during the course here.
So will write again when I hear from you. Best of luck to you all and have you seen much of Mary lately? Have had two letters from her already.
Sincerely Jack
Date Of Event
30 July 1941
Subject(s)
Correspondence
Military
Royal Canadian Air Force
Second World War
Personal Name(s)
Tate, John "Jack" Chapple
Local identifier
2017EG001.033.1-2
Language of Item
English
Geographic Coverage
Donor
M. Eleanor (Tate) Gloster
Recommended Citation
Letter, John "Jack" Chapple Tate to Margaret Tate, 20 July 1941, M. Eleanor Gloster. 2017EG001.033.1-2.
Terms of Use
The information and images provided are for personal research only and are not to be used for commercial purposes. Use of this information should include the credit "County of Brant Public Library".
Contact
County of Brant Public Library
Email:digitalhistory@brant.ca
Website:
https://www.brantlibrary.ca/
Agency street/mail address:
County of Brant Public Library (Paris Branch)
12 William Street
Paris, ON
N3L 1K7 | @brantlibrary 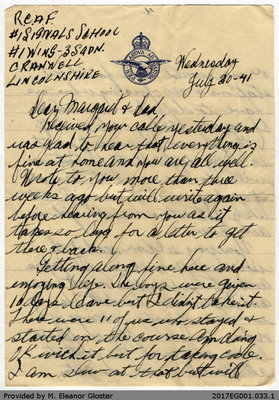