The Paris Lawn Bowling Club is one of the oldest clubs in Ontario, second only to the Paris Curling Club.2 Initially, lawn bowling was practiced on Elm Street, and was later moved to Andrew Baird’s front lawn. Eventually, the sport took place at the Presbyterian Church grounds. Once the church purchased the property, the greens moved to its current location (169 Grand River Street North), which, was rented from Mrs. Davis for a number of years until Reg. Thompson purchased the land and gave it to the club in 1928. The first recorded tournament took place in 1884, where players engaged in Lawn Bowling and afterwards went for dinner at the Arlington. It is from this record that the official establishment date has come from. While early original records call the club by the name of the Paris Lawn Tennis and Bowling Club, the two sports eventually belonged to separate organizations, which is clear by about 1912. Special to the Paris Lawn Bowling Club is its perseverance throughout the depression and war. While many clubs suffered during these years, the Paris Lawn Bowling Club has never had an inactive year since its establishment.3

Originally, a small clubhouse for men and 20 well-kept bowling greens were present on the lot. A women’s clubhouse used to be located in a corner by the greens, and on the same side were tennis courts that were later replaced by horseshoe pitches. There was also a 10-foot wide boardwalk along the river’s edge of the property. It is said that trainloads of players from England would travel to the Paris Lawn Bowling Club for tournaments, and then go to the Arlington for dinner and head back to the train station to travel to other Canadian cities for the sport. The club became incorporated in 1927,3 and in 1949, the men and women’s clubs merged after renovations allowed for a much larger clubhouse to be built in place of the previous men’s building. The new $10,000 club was open to its members on May 24, 1949.2 In 1986, the club was sold to the town of Paris for $1 when it was suffering financially. Today, the Paris Lawn Bowling Club is still in operation and has 65 members who play on 8 greens.3

18?? – Lawn Bowling was Played on Elm Street and Then on Andrew Baird’s Front Lawn 3

There were 25 members. This is the first recorded instance of a tournament where players went to the Arlington for dinner afterwards.3

1926 – Women Began Lawn bowling and Had a Separate Club House

The women’s club house was by the railroad bridge at the North end of the greens. The men’s club remained at its current site.2

That same year, a large tournament was held that featured 80 rinks playing on 20 greens with people from Windsor and Kingston.3

1928 – An Estimated $8,000 was Spent on Upgrades for the Club, and The Lot was Officially Purchased3

A donation made by Mr. Turnbull allowed for the addition of the south green for bowling.2 Reginald Thompson purchased the property that the club was renting and donated it to the club.3

At the event, there was a buffet and live orchestra on the patio.3

64 rinks from all parts of Ontario participated in the event.2

32 bowlers over the age of 60 years played in a tournament with guests from Ayr and St. George.2

1949 – One large Clubhouse was Built on the Property; the Men’s Club House was Sold and Removed2

Money was donated by club president Mr. Martin to erect the new clubhouse for both men and women’s use. J.W. Kilgour was Vice President at the time. The new club was estimated to cost $10,000. Mrs. G. Gourlay and Mrs. Vera Lilley – Presidents of the ladies club - provided a $100 donation towards the new club to help with costs.2 One half of the clubhouse was built first and the other half was finished later in the year.3 The club had 130 members at this time.

May 24 – The clubhouse was open to its members.2

The clubhouse began to be used for winter events like valentine’s dances, games of cards, euchre, and bridge.2

Unexpected renovations to the clubhouse and equipment shed, as well as low membership caused financial trouble for the Paris Lawn Bowling Club.2 The club sold the property to the town of Paris for $1.3

The original men’s clubhouse on the current property was a small, single detached, single storey building with a rectangular plan. The layout on the façade facing the green was symmetrical with two large flat structured bay windows on either side of the main, center door. The medium hip roof had an attached overhang supported by thin posts that shaded a wooden deck. The exterior material of the building was vertical wood paneling.

The new building, resurrected in 1949, is much larger but still maintains the single detached, rectangular structure. The layout is also symmetrical with flat windows and a center door. The 1949 building is one and a half storeys tall and has two dormer windows that feature gables with overhangs. All doors and windows on the main façade of the building had awnings that were sage green.2 The roof is a medium gable that was originally red with a center side right chimney. Vertical white clapboard makes up the exterior material of the building. The terrace at the front of the clubhouse faces onto the green and has chairs and tables for seating.2 On the green there are seven lights in place for night bowling.2

On the interior of the clubhouse, the main room is 30 by 32 feet. As recorded in 1949, there was a modern kitchen, dressing rooms on the lower floor, and an office space. The interior of the club’s building also had hardwood flooring.2 The grounds caretaker resided in the upstairs portion of the building.3 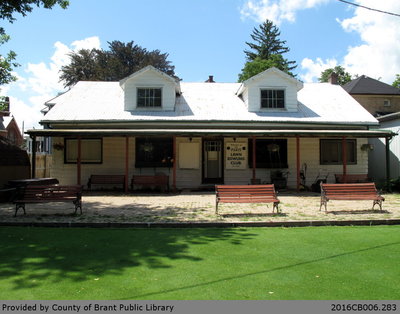