This red and yellow brick Ontario Gothic Revival farmhouse is typical in plan and construction of the dwellings constructed during its time. The center plan, story and a half farmhouse is a practical design allowing efficient ventilation and a second story at a reduced tax rate. The design was popular enough to have been featured in farmer's magazines. Indeed if one has the time and inclination to tour the County of Brant in search of historic homes, it is hardly the only dwelling constructed according to this plan. The Workman family has a history in what was Onondaga Township, that is as old and established as the house they inhabit. Their family home has sheltered five uninterrupted generations of the family:

Samuel Jr. was born in Glanbrook Township on June 10.1

The census of 1861 lists Samuel Workman and his family as still residing in Glanford Township, Wentworth County. Evidently they had not yet moved to what was Onondaga Township.3

On December 2, Samuel Weylie transferred the ownership of the lot upon which the farm rests to Samuel Workman. 2

The two were married on November 2, in Carluke. 3

The two were married on December 20. Sometime after their marriage, Robert and Etta moved out of the Workman family house.3

Samuel Workman Sr. died on November 2 in Wentworth County where he may have lived with his daughter Elizabeth Kelly.3

Howard Workman is born on February 10.4

The two were married on January 10.3

The two were married on June 1.3

Howard Workman is born on April 27.4

On April 23, Howard purchased the farm with all attendant lands, buildings, equipment and livestock from Samuel for the sum of &700.1

On April 27, Donald Workman was born.3

Samuel Workman Jr. died on January 9 on the farm where he spent most of his life.3

Howard Workman divided the farm lands in two along the road that bisected his fields. 50 acres on one side to Lorne Calvin Workman, and the 50 acres on the other side to Donald Howard Workman.3

Brian Workman was born on July 19.3

Donald Workman died on April 234. The 50 acres of farmland he looked after passed to Brian Workman.3

Brian Workman died on May 84

Samuel Workman Sr. was born in 1834 to Daniel Workman and Mary Ann O'Neil in Tamlaght O'Crilly, Derry County, Northern Ireland. He married Elizabeth Blair on April 7 of 1854 and immigrated to Canada about 1856 when he settled in Glanford Township, Wentworth county. The census of 1861 listed Samuel Sr(25 years old), Elizabeth(28 years old) and their baby Elizabeth (born 1860) as residing in a single story log cabin. 1

The Workman homestead is an example of a modest rural Ontario Gothic Revival style house. The house is based on a center plan common to early rural architecture in Canada - the exact same plan was in fact promoted in 'The Canadian Farmer' in February and November of 1864. Note that the farm is a story and a half - a popular feature at the time which allowed the owners to have two levels at a cheaper tax rate. The rear 'tail' of the house was added at a later date and the upper elevations mirror the lower floor plan. A center gable with arched windows rests above the front entrance in typical Gothic Revival style. The facade is symmetrical - though the original 2 over 2 rectangular sash windows have been replaced with more modern ones for better insulation.1


It is interesting to note the Irish influences present in the design: the entrance opens directly into the family room in order to welcome visitors immediately to the hearth, opposite each door is another door or window - a feature practical for both cross ventilation as well as allowing 'the good people' (faeries) to easily come and go, ensuring good luck for the household.1


The foundation is cut or field stone while the walls are locally made double red brick with buff (yellow brick) accents. The decorative frieze at the top of the first story elevation is done in the dichromatic red and yellow brick style. The quoins and the soldier's course lintels above the windows and doors are also done in buff brick. A diamond design is done in buff rick at the ends of the gables, above which the brick chimneys emerge.1 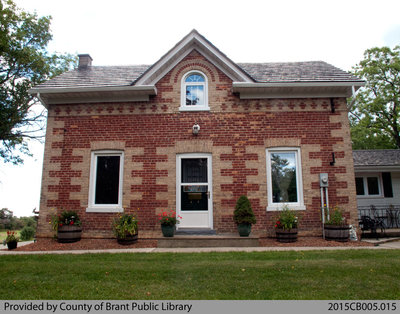