BY MEL ROBERTSON Feb. 19th. 1914 Burford - On Monday evening Mr. Joe Brethour took about 20 young people on a sleigh ride to Princeton to attend a party at the home of Mr. J. & Mrs. Martin. On the way over they hit a soft spot and the sleigh upset. Everyone fell out

including the driver but no one was hurt and the party at Mr. J Martins was a success. Euchre was played and Miss Connie Templer and J. Brethour were the winners. Note We have to wonder if the sleigh upset was contrived. This was one way to get acquainted with a girl in 19H and there are several stories of Local blades who managed to have then-cutter upset so they could have a tumble in the snow with some girl they fancied.

Burford - There have been two mishaps on the local Railroad this week On Thursday the noon passenger train broke an axle at Mt. Vernon and another engine had to be sent. On Tuesday the train from Tillsonburg blew a cylinder near Harley and another engine had to be sent to take the broken engine to the Harley siding and then take the cars to Brantford.

Burford An organ recital will be held in Holy Trinity Church on Feb. 23rd. There will be violin solos by Mrs. Luard and Miss Cavan. Miss Mott of Mt. Vernon will sing and Mrs. Adams, former assistant organist of St. Pauls Cathedral, London, arid of the Guildhall School of Music of London, England, will sing and play. There will be' a silver collection for the Choir & Organ Fund.

The brush dam at the local Hydro plant has been washed out. It was repaired and washed out again so electric light has not. been too good for a lime. Note - This Hydro plant was on Mr. Jack Whiteheads property on the 6th Concession. Dams washed out frequently and lights were on and off as a result. The management were very good at keeping things going. Lights were turned off at 11 p.m. each night but you' could get an extra hour if you were having a party.

Burford Mr George Everett has purchased Mr Charles store on Maple Ave. South and will open shop on March 1st Mr. Everett has extensive experience and will run a good store. Note - This store was one of four in the Barnea Block (now the site of Dave McLarens store). This was known as "Wall street. There was in addition a butcher shop, a harness shop and a barber shop. This block was destroyed in the great fire that burned the old hotel.

Fairfield - A social at the League on Tuesday was well attended. An address •was read by the pastor to Mr. & Mrs. Sam Porter who are moving to Paris. Mr. Ed Standing & Mr. Geo. Rutherford presented Mr. & Mrs. Porter with two beautiful rockers.

referred to was the Epworth League, an organization in the Methodist church for young people.

Burford A Box social was held in Kneales Hall (over Balsdons hardware. 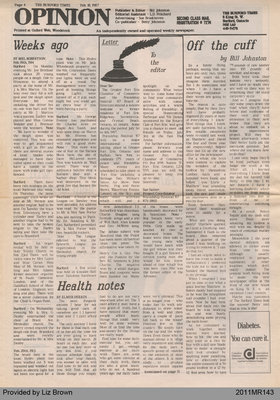