Creator
Robertson, Mel, Author
Media Type
Text
Item Type
Articles
Description
From the 1970s through the 1980s, Mel Robertson wrote many articles for the Burford Advance and Burford Times on the history of Burford Township. This clipping contains the article "A Burford Social Note of 1889". The article may not have been republished.

A Burford social note of 1889 by Mel Robertson

The following news item appeared in the social column of the Toronto paper "Saturday Night" on January 26th., 1889-

"The gentlemen of Burford gave a delightful dance last Thursday night. About sixty people from Brantford and about twenty from Paris attended. The ballroom was prettily decorated with flags and evergreens and the floor waxed to perfection, at least, so said the dancers, for myself, not being a dancer I found that "to hug the wall" was the safest mode of traveling. A special train brought the Brant-ford party home at 2 o'clock. Everyone declared it to be one of the most pleasant events of the season and a great deal of praise was given to our handsome hosts for their hospitality. Among the guests were Mrs. A.S. Hardy, Mr. and Mrs. G.H. Wilkes, Miss Kate Wilkes, Mr. and Mrs. Herbert Yates, Mr. and Mrs. W. A. Wilkes, Mrs. Hamilton, Mr. and Mrs. L.E. Blackader, Miss Ross, Mr. and Mrs. F. J. Wilkes, Miss Pauline Johnson, Miss Curtis, Capt. A. E. Christie, Miss Lizzy Christie Miss May Bennett, the Misses Haycock, the Misses Van Norman, Mr. E. Bishop, Miss May Bishop, the Misses Leonard, Mr. H. Leonard, Miss Goodson, Miss Wye, Miss Greer, Mr. E. L. Goold, Miss De Long, Messrs Warwick, Minty, Temple, F.D. and R. Reville, T.J. Finucane, Perley and others".

The dance referred to was one that was put on annually, for a number of years, by the young English farmers of the Burford area. These included the younger sons of a number of English noble families, the son of an English bishop and sons of wealthy industrialists and professional men. They were sent here at their parents' expense, to learn Canadian methods of farming; which locally consisted in doing all the dirty jobs such as mucking out stables. A number of these young men married local girls and founded well-known families which still flourish in the area to-day.

The locale for this ball was the Barnea Hall at the corner of King St. and Maple Ave. in Burford. This was an ideal site for such an event as a late supper was included and the dancers were able to move to the hotel dining room without leaving the building.

The ball did not consist of informal square or round dances but followed a regular printed program of waltzes, schottisches, lancers, two-steps, etc. Music was usually supplied by a Brantford or London orchestra.

Certain sections of the local population deplored balls of this nature. Waltzes, in particular, were thought to be immoral due to the close face-to-face confrontations they engendered. Others, who favoured the more boisterous square and round dances thought that dances such as the lancers and two-step were rather prissy. Indeed, a comic song which included the words "My son Francis can dance the Lancers and all the other fancy dances" was guaranteed to bring down portions of the "house" is sung at a concert in a la-di-da manner. However, many Burford people were adept at the many steps required at balls and it was said that one family who boasted that they could outweigh any family in Ontario, were the lightest-footed of the village.

The importance of the ball can be judged by the fact that the Toronto paper sent a reporter to cover it and the list of guests from Brantford include many of that city's prominent business and professional men; as well as a number of its belles and well-to-do bachelors.

The provision of a special train is interesting. One has to wonder if this transportation was provided at the expense of the guests or if the local gentry included it among the amenities of the ball. From other news events of the era, it is probable that the train was laid on by the local hosts as it was not a difficult, or expensive, thing to obtain a special train for picnics, outings, church services, etc. There is no indication as to

how the Paris guests got home, but when we consider that there was almost no snow - clearing of roads in 1889, they probably used the special train.

It may seem strange to some that so much effort was put into an event of this nature but it must be remembered that in the days before motor-cars, radio, television, etc., people either made their own entertainment or went without. In addition, people were not as mobile as to-day and thus were more community-minded.

. .When the "Advance" published a couple of my pictures of the train wreck that took place east of Burford in the early 1900's, a number of people called to identify people in the pictures and to ask if I had any more photos on the subject. Recently, through the courtesy of Mrs. Frank Wright, Dufferin Avenue, I obtained a complete set. The late Mr. Frank Wright's father was engineer on one of the locomotives involved.

.. The wreck was caused when a yard-engine was sent from Brant-ford to help a heavy freight into Burford. Through some error, a special freight loaded with lumber on flat cars, was dispatched before the yard-engine

returned to Brantford. The morning was foggy and the special ran into the rear-end of the yard-engine which was backing to Brantford. The crew of the yard-engine managed to jump clear but the engine crew of the special was killed. Picture 2 shows the engine of the special. Picture 4 shows the well-dressed crowd of spectators watching while efforts were being made to lift the engine off the bodies of the crew. Note the rather primitive "Big Hook" on the right and the typical derby-hatted foreman standing by the locomotive wheel. People who study early railroading will note that, for some reason, supervisory R.R. personnel always dressed rather formally in black suits and black derby hats. In this case the foreman has recognized the heat and removed his coat. Can any reader identify people in these pictures? 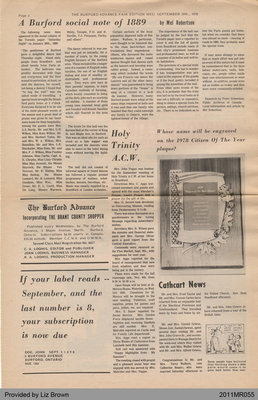