Creator
Robertson, Mel, Author
Media Type
Text
Item Type
Articles
Description
From the 1970s through the 1980s, Mel Robertson wrote many articles for the Burford Advance and Burford Times on the history of Burford Township. This clipping contains the article "The Playground Telegraph" describing winter sports in Burford in the 1920s. The article may not have been republished.

In the late 1900s we have become accustomed to instant information through fax machines, 10-second news casts and computers and as long as the electricity is working and our batteries are fresh we can appear to be well informed- However when electricity, batteries and software fail many people have nothing to fall back on and their intelligence quotient drops to nil. Thus people tend to feel that anything not run by electricity is not "awesome" and thus stupid, However, in the 1920s when I was a kid, we did not have these adjuncts to intelligence and had to rely on a mysterious form of communication that could be described as the "Playground Telegraph". This was a, means whereby bits of information 'waif'" got around without any electrical assistance or adult help. How did this primitive, but effective, means of communication work? The main reason for its success was, perhaps, the complete lack of organization behind it. To describe it, let's start in a 1920s winter.

In the 1920s there were no adult organizations assisting kids in winter sports. The local rink was an "iffy" thing that could be on or off depending on the weather, or the whim of whoever was operating it. It was only available at a price and the price of 10 cents was more than most kids could raise. So how did we learn to skate? Well, along about the first week of December, word would go round the "Playground Telegraph" that the ice on the "Dead Pond" one mile north of Burford would "bear", and kids would begin to think about skating and hockey. How was this information obtained? I never knew (or cared to know) at the time but looking back it must have been by some kid who was walking to school from the 6th Concession taking time from his daily journey to test the ice.

At other times after a January thaw word would go round that there was a skating pond "behind Muir's" (now the site of the arena) or by "Baker's barn" (now Wilson Boulevard) or "this side of Joe Brethour's". Since these sites were not on anyone's line of travel, how did this word get around? Sometimes the information was accompanied by word that a hockey team from "out south' play the kids from "up town11 on a certain "after four". No one organized these games but when you turned up with your "Bulldog" skates and hockey stick there was the hockey team ready to take you on with frozen "cow flaps" as goal posts. Kids did not walk to these games in groups but as individuals sure of the truth of "The Playground Telegraph".

Sometimes the "Playground Telegraph" came up with remarkable details such as the fact that the ice might be "shelly" in certain places or that there were nasty weak spots in the ice of the "Dead Pond". No one ever claimed *o have m»Ho an actual inspection of these impromptu rinks but every kid knew the information was correct without asking. At other times word would go round that the creek was frozen solid and that "everyone" was going to take a hike on it. Here again no one organized anything and you turned up as an individual to find that almost every kid in the village was there ready to start walking to "The High Banks". Other winter activities were night-time skating parties at the mill pond north-east of Bur-ford. No one issued invitations but kids turned up unasked even though the walk to the mill pond involved a tramp of over a mile through fields that were either bumpy for lack of snow, or heavy-going because of it.

If it wasn't skating it was sleigh riding and sometime during 3 o'clock "recess" it would be whispered that everyone was going sleigh-riding at Bishopsgate hill. No one called to get you but when you looked out the window after supper there were kids with sleighs trudging eastward. Then you put on your mackinaw coat and overshoes and joined them. At the hill you would find that a little fire had been built to keep you warm and you lost no time in flopping on your "Overland Flyer" and roaring down the hill.

In summer after school was "out" the "Playground Telegraph" took on a new method of operation. There were no public playgrounds as such in the 1920s and kids tended to avoid the school playgrounds when school was "out". However, word of coming events still got around. Someone would say, "There's a big pike in that hole west of the Red Bridge", you knew that this was a fact and you would join the crowd of kids watching the fabulous fish. At other times the news would be of blue herons at such and such a spot, or muskrats somewhere else, or big snapping turtles or funny '•stone-carriers". On the side of disorganized sports would come word that a soft-ball team from "out south" was ready to* play a team from • up-town". Then you went out "after supper" and formed an on-the-spot team by yelling "I borrow pitcher", "I borrow catcher", etc. until a team was formed. If someone had a bat he took it along. If someone had a ball of

sorts it was taken. If "Fido" Bowerman, the Royal Bank Scotch collie, was around h€ went too. You set out sure of the fact that somewhere south of the RR tracks a ball team of some kind would be waiting to take you on. It was hard to predict who would be on the opposing team and on one occasion it turned out to be a team of girls. This was an astonishing revelation but after we got over the shock someone traced a ball diamond in the dust of the road to the canning factory and we had a game which the girls won.

Playing a ball game against a team of girls was quite out of keeping for the "Playground Telegraph" system was masculine-oriented and we suspected that there had been a short circuit somewhere. Our surprise and initial resentment may seem strange in this age of strident feminists but in the 1920s there was strict sexual separation. Schools had separate doors for boys and girls, playgrounds were segregated, separate days when boys and girls could use the hall for play and separate line-ups in the hall when we marched to classes. Sunday school classes were divided sexually and boys and girls" were taught to assume certain definite "roles" in life. This tended to make many boys "girl-shy" and unless they had sisters, many boys kept to themselves. I don't know if remnants of this nonsense survives today, but I doubt it.

The "Playground Telegraph" produced many strange bits of information. One such bit was information about "Silk Trains" and word would be whispered that a "Silk Train" would be going through Brantford on a certain night. "Silk Trains" were the mystery thing of the 1920s. No kid ever saw one but they did exist. They were the means whereby shiploads of silk from the Orient were moved from Vancouver to eastern Canada. They were reputed to consist of heavily guarded express carts drawn by double-headed engines that raced across Canada with hardly a pause. It was said that all switches were sealed and that people were barred from all stations. Armed gangsters were alleged to be waiting at crossings with ingenious devices that tho train The was supposed to prevail about "Silk Trains" and any kid who had information about them was held in awe. How much of this was nonsense we never knew but when the information went around every kid's ears were on edge expecting to hear some special sound as the fabulous train dashed over the Grand Trunk line north of the village. Looking back I suspect that the "Silk Train" rumours were fabricated by some kid who wanted to be thought a "know-all". However, we wanted to believe these things and when a train whistle sounded on that certain night kids would turn over in bed and think, "There goes the Silk Train". In all probability the train whose far-off, lonesome whistle called to us through the night was merely a slow way-freight trudging along with

Occasionally completely incomprehensible bits of information flashed along the "Playground Telegraph". One such item was word that someone we did not know had got "knocked up". This was puzzling news and in our ignorance we thought that the person concerned had been hit by a car. Being automobile-minded we wondered what kind of car had done it? Was it a Studebaker, a Grey-Doit or even a Pierce-Arrow?

Does a form of "Playground Telegraph" exist today? If it does it wouldn't be called a "Telegraph" for the speed of Fax machines and computers have made the speed of the old-fashioned telegraph seem trivial. Somehow I feel that there is no modern equivalent of this primitive form of communication. From my observation of grandsons and other 1990 boys I have come to the conclusion that due to the multiplicity of electronic games, TV programs, organized sports and such things as Nintendo, VCRs, Kung Foo lessons and language immersion there is not the close bonding that existed between young boys in the 1920s. Certainly there is not the same general interest in the things of Nature other than short lived (and adult-inspired) environmental enthusiasm. Boys no longer find anything "awesome" in the subtle change of gold finches form green to gold or in the discovery of a fringed gentian. The that a 1920s boy experienced in a simple crystal set has been replaced by the power that can be generated by a super computer.

The mind of a 1920s boy was too simple to contemplate the invention of some weird electronic vehicle that would enable people to kiss the backside of the moon in the year 2000. Their knowledge of science was limited to books like "Torn Swift and his Electric Athletic Supporter* and their admiration for inventors was confined to the inventor of the three-cell flashlight. However, we did have enough knowledge cf Nature to tell the difference between B.S. and broccoli and enough common sense to know that "Andy-Gump" was not living in outer space.

So I haven't explained how the "Playground-Telegraph" worked. Actually I didn't care for those details in the 1920s and I doubt if anyone would be interested in the 1990s. I don't recall its existence with nostalgia but with amusement and I don't think that if someone whispered that there was a big pike in that hole west of the Red Bridge I would bother going to see if this was so.

You may laugh at the simple "Playground Telegraph" of the 1920s and treat it with scorn, but before you laugh too loud and too long don't forget the tabloid papers we see every day at supermarket check-outs. When we note headlines such as "Man of 96 buried since 1971 fathers quintuplets" and realize that enough people buy such papers to keep them in business maybe the "Playground Telegraph" wasn't too bad. 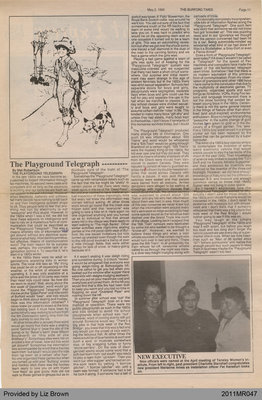