Creator
Robertson, Mel, Author
Media Type
Text
Item Type
Articles
Description
From the 1970s through the 1980s, Mel Robertson wrote many articles for the Burford Advance and Burford Times on the history of Burford Township. This clipping contains the article "Music by Messecar" describing the history of the Burford Band. The article may not have been republished.

Music by MeSSCCar by Mel Robertson

Last year the "Times" published my article "As We March to the Burford Band". This was a history of band and orchestral music in the Burford area with special emphasis on the Burford and Scotland Brass Bands. I received many compliments for this article and I would like to thank the people who gave them.

In my article I mentioned that Andrew Messecar, editor of the Burford "Advance" was the heart and soul of band and orchestral music in this area during the late 1800s and early 1900s. I knew that he had composed band music but was not aware of the magnitude of his work. However, recently through the courtesy and kindness of Mrs. Viola Weir, Andrew Messecar's niece, I received a quantity of hand written music composed, or arranged, by Mr. Messecar. This reveals the breadth and depth of his work.

In composing band music Andrew Messecar used the German version of his name - Metzker". He felt, apparently, that since there were so many German composers of band music in the late 1800s that such a "Nom de Plume" would be more acceptable in that part of the music world.

When we think of band music in the late 1800s and early 1900s we tend to think of Philip Sousa and marches. However, Andrew Messecar did not confine his talents to marches. Quite to the contrary, for his compositions included waltzes, quadrilles, polkas, overtures, cake walks, mazurkas, galops, two steps, and scottisches. He also arranged "pop" songs for band and made his own arrangements for such patriotic songs as "The Maple Leaf. Compositions included in Andrew Messecar's hand-written manuscripts are -Waltzes - "Riders of the Plain" (which he dedicated to RCMP Commissioner L.W. Herchmer), "Love's Dreamland", "Marabella", "Fantasia", "An Impassioned Dream", "She's My Girl", "Shepherd's Story" and Idylewild", Polkas - "Little Frankie"," Little Willie", "Little Rosebud" and "Monte Carlo", Marches - "Sword of Honour", "Soldier of Fortune", "Sacred March" and "Manhattan", Overtures - "Star of Hope" and College Life", Cake Walks -"Happy Days in Georgia" and "At a Georgia Camp", Schottisches - "Little Sunbeam", Galop - "Twixt Wave and Sky", Reverie - "Twilight Dreams", and Two Step

Also among the hand-written scores are Messecar's band arrangements for such "pop" songs as "Moon Winks" and "Tenting on the Old Camp Ground" plus new settings and transpositions for such band standards as "Rule Britannia" and "Liberty Bell".

When not engaged in composing band music Andrew Messecar devoted his considerable talents to "pop" music and his original songs include "Mamma's Boy", "Somebody's Waiting for You", "Nobody's Little Girl", and "Starlight". These compositions include words and the following is an example from the song "Starlight":

"You'll be my Starlight, Heart of my heart"

"And when you're lonely, My Heart's delight"

"Dream of your true love, Goodnight"

Verses to Andrew Messecar's "pop" songs are written under the musical scores in a neat and beautiful hand. I do not know who composed the verses or wrote them down but Andrew Messecar's wife Becky was a women of considerable talent.

Andrew Messecar was not a conservatory-trained musician. However, when he was a boy he attended a school in England whose headmaster placed great stress on musical education. Along with all the basics, bars of music would be placed on the black-board and students would be required to identify and explain them. This gave Mr. Messecar a good base for his later composing and instilled in him a love of music. I cannot judge the technical quality

of Mr. Messecar's musical scores for whereas I had some musical training as a boy and young man, I am unversed in the technical knowledge needed to compose and write down music. However, as a teenager I was aware of the skill and education my late sister Emilie needed to get her ATCM and the study in orchestration, transcription and composition she had to undertake to get her Licentiate in the Royal School of Music. In addition, my mother was a conservatory-trained musician and as a bumbling clarinetist I played for a couple of years with the Central Symphony in Moncton, N.B. From all this exposure to music I can see that Andrew Messecar's work displays high technical ability. I cannot judge the melodic quality of the music. I daresay that many of the compositions were played by the Burford Symphony Orchestra which Andrew Messecar organized in the 1920s and which played at garden parties and at the motion picture shows that A.E. Judge, principal of the High School and a clarinetist, ran in the old High School. At that time I was a young boy who was more interested in such "pop' songs as "Yes We Have No Bananas" and "Barney Google" than I was in "An Impassioned Dream" or "Mirabella".

Andrew Messecar's music was published in the "Bandsman", a magazine he edited and produced on the "Advance" press. Complete scores were offered at 50 cents per double sheet. A complete score including parts for the bass and snare drums, would have cost about $8.1 don't know how long "The Bandsman" lasted but from the high quality of the few sheets I have in my possession it would have had popular appeal among bandsman.

Burford has had a number of composers of "classical" music. Between 1939 and 1941 Harry Woolley, director of the United Church choir, and the Rev. W.G. Bugler (a good name for a musician) of Holy Trinity Church composed new settings for new ones. Bernard Smallman, organist at Holy Trinity church, composed sacred music which he played at church services. My late sister Emilie was required to compose and orchestrate a full symphony in four movements as part of her LRSM qualifications. Another Burford man (whose name shall be unknown) fancied himself to be a composer. He brought some of his "Compositions" to mother for her evaluation. She said that "the first time over" they seemed to have considerable merit. The second time she played them, certain parts sounded familiar. Shethen took them to A.G. Merriman, director of the Brantford Conservatory of Music, organist at Grace Church and Emilie's teacher. He denounced them at once as sections cribbed from the works of famous composers and skillfully fastened together. Mother suggested that the man take his music to Mr. Merriman. When he did so Mr. Merriman denounced him, to his face, as a fraud and that was the end of that.

In listing Andrew Messecar's compositions I drew my information from sheet music bearing the name "Metzker" and from a couple of large hand-printed and hand-sewn manuscripts. These were prepared by Mr. Messecar for each member of the Burford band. The two I have were prepared for the cornet. Not all are signed but I have been given to understand that they are all Mr. Messecar's work. Some are original compositions but others which appear under such well-known titles as "The Maple Leaf and "Rule Britannia"' are Mr. Messecar's re-arrangements of the original tunes and thus can be claimed as products of his musical skill. Mr. Messecar was careful of never putting his name on other composer's works or claiming them as his own. If, however, I have included any non-original work in error, I apologize. People who spend their lives pointing out other people's errors can bolster their egos by pointing out any I have made.

Andrew Messecar has been gone from our local scene for many years. Only people my age (give or take a few years either way) will remember him as the conductor of the Burford Symphony orchestra. Possibly the only musical organization that had any connection to him is the band on the Six Nations Reserve which Andrew Messecar organized and led at one time. People without musical inclinations will remember him as he bicycled through the streets on a summer's afternoon with his fishing rod tied to his bicycle en route to the creek north of the village. Since fishing is supposed to generate the quiet contemplation that inspires thought, we are bound to wonder if the inspiration for Andrew Messecar's music arose as he waited for the fish to bite. 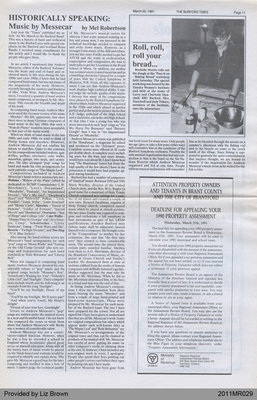