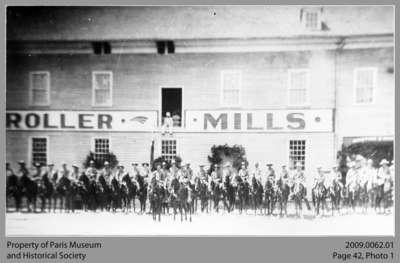 While the earliest mills in Paris were for grinding plaster, the most common use for mills was for grinding flour (Priamo, 15) – particularly in Ontario. The first mill Capron built when expanding his first raceway was a grist mill for producing flour. Mills had started out as tools for farmers to grind the grain they grew themselves, but by the 19th century there was a major business for merchant mills – mills which were not owned by farmers, but which bought grain from farmers to transform into flour for the mill-owners to sell (Priamo, 19). By the 1840s, Ontario became important to the mill-trade. Grain and corn from the American West could be transported to Ontario, milled to produce flour, and then exported to Britain at a profit (Priamo, 20). Capron’s raceways provided the power these merchant mills needed to operate. 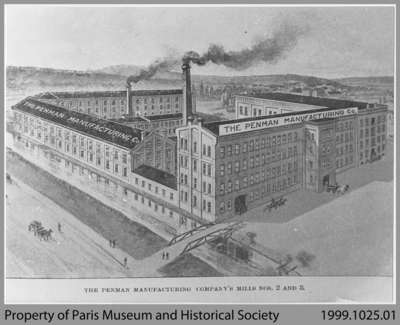 Another important industry was cloth manufacture. Essentially all aspects of cloth manufacturing could be done using machine-power, including carding, spinning, weaving, and fulling the cloth (Tyrwhitt, 47).

This attracted cloth and clothing industries to Paris, the most important of which was the Penman Manufacturing Co. of John Penman. While his family had established a textile mill in Woodstock, the need for more water power sent the young John to Paris. He rented a building along the Nith River raceway from Charles Whitlaw, where his first mill was built in 1868. By the 1880s, Penman was operating three mills in Paris along the Nith River and Willow Street raceways and his booming knitting mills were the largest business in Paris (Smith, 64) – the realization of Capron’s vision of the potential of a village built on two rivers. 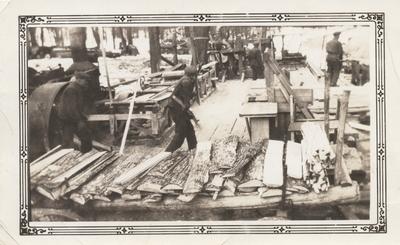 One of the most common uses of mills in many places is to saw wood. Sawing wood by hand is slow and tedious, which limits the amount of lumber a person can produce. However, it is possible to create straight or circular saws which are powered by water. Using the energy of water, these saws could turn fast and efficiently in order to cut wood much more accurately and quickly than a person could by hand; some mills used more than one sawblade to cut an entire log into a full set of planks all at once (Tyrwhitt, 47-48). The most notable sawmill in Paris was run by Asa Wolverton, whose successful mill was along the Nith River raceway not far from where John Penman would later build his first mill (Smith, 63). 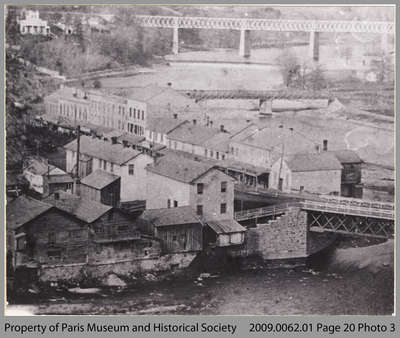 Another industry which benefited from water power was tanning, which is the process of manufacturing leather from animal hides. While tanning could be done without machinery, it was able to become much more efficient with the help of machine-power. Tanneries needed a source of water to soak the hides, which meant that they needed to be built next to a river. They also needed to be able to produce tannin, a chemical which preserves and strengthens the skin, which came from wood bark. Water-powered tanneries worked by using water-powered machines in order to grind up the bark for tannin (Shackman). Hides could also be softened before tanning using a hide mill, in order to produce better-quality leather, by using water-powered mechanisms to pound them (A.D. Marble glossary).

Hugh Finlayson, with his business partners Hugh McVicar and James Montgomery, bought a tannery which was originally built in 1832 (Reville, 401) and operated it for many years as one of the town’s successful businesses. Finlayson was also a prominent local politician, having held almost every major office in the town (Canadian Biographical Dictionary); he was one of the town’s first councilors, the first mayor, re-elected five times, for three terms the area’s representative in the local assembly, and a member of the provincial legislature for twelve years (Smith, 63).