Creators
Colborne, Sir John, Author
Gadd, Thomas
, Author
Media Type
Text
Image
Item Type
Documents
Description
This grant from the Province of Upper Canada gives Thomas Gadd 446 acres of land in Paris (then the Township of Dumfries), north of Dundas Street. His land is described as bordering Capron's.
Date of Original
20 Jan. 1836
Subject(s)
Land
Land grants
Paris, Ontario
Local identifier
2007.0158.12
Collection
Hiram Capron Collection
Language of Item
English
Geographic Coverage
Copyright Statement
Public domain: Copyright has expired according to Canadian law. No restrictions on use.
Recommended Citation
Grant of Dumfries Land to Thomas Gadd, 1841, Hiram Capron Collection, 2007.0015.12, Paris Museum and Historical Society
Terms of Use
The information and images provided are for personal research only and are not to be used for commercial purposes. Use of this information should include the credit “Paris Museum and Historical Society.”
Contact
Paris Museum and Historical Society
Email:info@theparismuseum.com
Website:
https://theparismuseum.com
Agency street/mail address:

WILLIAM the FOURTH by the Grace of God, of the United Kingdom of Great Britain and Ireland, King, Defender of the Faith.
To all to whom these Presents shall come, -GREETING:

KNOW YE, That We, of our special grace, certain Knowledge and mere Motion, have given and GRANTED, and by these Presents do give and Grant unto
Thomas Gadd, of the Town of Paris in the Township of Dumfries, in the County of Halton, in the District [Gore], Yeoman

heirs and assigns for ever; All that parcel or tract of Land, situate in the Township of Dumfries in the County of Halton in the District of Gore -------------------- in our said Province containing by admeasurement four hundred and forty six acres be the same more or less being Part of a Tract for Parcel of the land originally leased by the late Captain Joseph Brant Agent for the Six Nations Indians, to Benjamin [Ca?by] for the term of nine hundred and ninety nine years, Like [a??] in the Gore of Indian Lanes North of Dundas Street in the paid township of Dumfries

GIVEN under the Great Seal of our said Province of Upper Canada: WITNESS, our trusty and well-beloved Sir John Colborne K.C.B. Lieutenant Governor of our said Province and Major General Commanding our forces therein at Toronto this twentieth day of January in the year of our Lord One Thousand Eight Hundred and thirty six and in the sixth year of our Reign.
By Command of His Excellency in Council.
D. Cameron, Sy 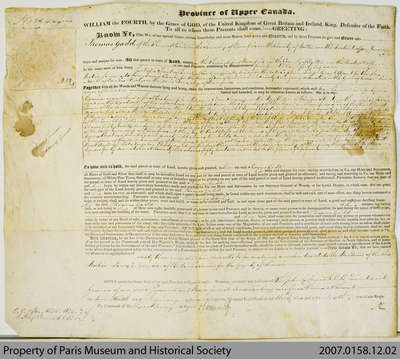