This home and farmhouse is located in the area of Burford Township. The house was originally built in 1880, and has been the home of over four generations of the Chamberlain family. In 1962, renovations were made by Charles Edward Joseph "Ted" Chamberlain, in which two bedrooms were added and the front porch was removed. An additional entryway was added during this year, in addition to additions at the back. The house was originally build with board and batten before having modern renovations.

Thomas Powell received a patent for 200 acres of land on Lot 16, Concession 14 from the Crown.

James Oswald and his wife agree to a division involving three-quarters of an acre of the plot's Western half to Melinda Chamberlain.

James Oswald and his wife agree to a division of half an acre of Lot 16 with John William Smith.

James H. Oswald, the eldest son of James and Eliza Oswald, agree to divide their land with the Lancelot W. Davidson for $8,000. 150 acres was sub-divided, which included part of the Eastern half of land.

James Oswald and his wife fulfill an agreement of sale concerning 54 and 1/2 acres of land for $90 to Charles Hedgers dating from 1852.

1905 – Bill of Sale to Aaron Chamberlain

Melinda Clarke Chamberlain makes a bill of sale for part of the Western half of Lot 16 to Aaron H. Chamberlain for $100.

John William Smith and his wife agree to a bill of sale of half an acre of Lot 16 to their son Joseph Allen Smith for $25. The instrument of sale was initially dated from 1870.

Sodema Smith, the devisee for Joseph Allen Smith, makes a bill of sale of half an acre of Lot 16 to Aaron H. Chamberlain for $25.

1916 – Bill of Sale to Hattie Chamberlain

Aaron H. Chamberlain agrees to a bill of sale for an undeclared amount of land on Lot 16 to his daughter-in-law Hattie E.M. Chamberlain, married to his son Charles Hedgers Chamberlain, for $75.

Melinda Chamberlain, Eliza Hedgers and Aaron H. Chamberlain agree to a bill of sale for part of the Western half of Lot 16 to their son Charles H. Chamberlain and their daughter-in-law Hattie Chamberlain for $1.00. They are guaranteed use of this land until they designate the next owner.

1917 – Bill of Sale to Melinda Chamberlain

Charles H. Chamberlain agrees to a bill of sale regarding part of the Western half of Lot 16 for $1 to his mother Melinda Chamberlain and to Eliza Hedgers. This agreement helps to secure their position as joint tenants and guarantee their position for the remainder of their lives.

1937 – Grant to Residents and Trustees School

William C. Davidson and his wife May Davidson agree to grant part of their land on Lot 16 to Orville Davidson, Charles Chamberlain, Clarence J Barnes and the Trustees School, Section #20 and #13 in Township of Burford and Windsor, for $100.80.

A grant made from the Burford Township District School Board and William C. Davidson to Edward Chamberlain & his wife Miriam Chamberlain, involving the South-Western part of Lot 16 as joint tenants.

1961 – Grant from Hattie Chamberlain to Miriam and Edward Chamberlain

A grant made for part of the South-Western one-quarter of Lot 16 and other lands made by Hattie Chamberlain to her son Edward Chamberlain and daughter-in-law Miriam Chamberlain for $1.00.

Charles Hedgers was born in March of 1813. He would live at Lot 16, Concession 14 from 1839 to 1895. He was a member of the first Burford Township council of 1st January 1850 and the County council in 1852, and served as a Captain in the 5th Brant Battalion of the Upper Canada Militia in 1856. He died on 29th August, 1895 at Kelvin United in Windham). Maria (Lymburner) Chamberlain was born 23rd October, 1816, and married Charles Hedgers 28th August, 1839. Their children included Nancy, James H., Charlotte, Melinda Clark (who married Aaron Chamberlain), Myra Jane, Ephraim Cook, Mary Eliza, and Fanny Maria.

Dr. Aaron Chamberlain was born 7th October, 1829 in East Oakland, Ontario in the Schnell farm to Joel and Elvira Main Chamberlain. Melinda Clark Chamberlain was born 2nd October, 1848 on Lot 16, Concession 14 to Charles and Maria Hedgers. They married on 10th November, 1869. Aaron attended the Michigan Medical College at the University of Michigan between 1864 and 1865, and the Victoria Royal Medical School in 1867. Aaron died on 11th November, 1916 in Kelvin, Ontario. Melinda died on 29th November, 1924 at her home on Lot 16, Concession 14, in Burford, Ontario. Their only child was their son Charles Hedgers Chamberlain.

Charles (D.D.S, L.D.S.) Hedgers Chamberlain was born 8th September, 1880 at Lot 16, Concession 14 in Burford, ON to Aaron and Melinda Chamberlain. Hattie Evelyn McCombs was born on 15th July, 1883. They were married on 22nd April, 1915. Charles graduated from the University of Michigan Dental Department in May, 1901, and graduated from the Royal College of Dental Surgeons in May, 1910. He died in 1953. Hattie died on 15th March, 1967. Their five children included the following:

Luna Merle -Born at Brantford Hospital on 29th December, 1921. She married Stanley Tule on 26th September, 1941 at the Salem Court House. They moved to Halifax, Nova Scotia in 1941. Her children included Durant Stanley and John Tule. 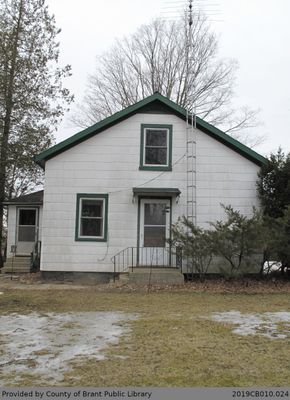