Creators
Arnold, T.E. (Ted), Author
Jones, Barry
, Recipient
Media Type
Image
Text
Item Type
Correspondence
Description
A single-page typewritten letter from T.E. (Ted) Arnold to his nephew Barry Jones. He notes that while it isn’t Barry’s birthday, he deserves a present to even up with his brother Stewart since Ted was too far away to send him his present at the time. He inquires whether Barry received the book he sent for Christmas.

The letter was provided by E. Ann McRae.
Notes
The Pate-Jones Collection consists of some photographs of the family members and a large group of letters. The majority of the letters are written by Margaret nee Wilson, and some by her husband Howard Jones, to their sons Barry and Stewart Jones, or to Mr. and Mrs. Pate. From 1940 to 1945 during the Second World War, Barry and Stewart lived with Margaret’s second cousin Andrew Wilson Pate and his wife Mary Herron nee McClure at the Brantwood Farm. The original farm was founded by Andrew’s father James Pate, and was situated on the south side of Powerline Road and Gretzky Parkway, which at that time, was considered part of the County of Brant.

The correspondences cover from detail Margaret Jones’ dilemma in settling her boys with virtual strangers, her return trip to England to rejoin the war effort there, news of farm life in England, the concern that England might lose the war, and the anguish of both families when Andrew Pate died in 1944, leaving his teenage son to run Brantwood Farms. These letters are therefore a fascinating way to conceptualize how the war affected daily life in Canada locally, and in England.

In recent decades, the original Brantwood Farm that was situated on the south side of Powerline Road was sold by the Pate family for development. The farms are now located on the north side of Powerline Road, and consist of several farms belonging to several Pate families, mostly within the County of Brant, remaining a thriving local establishment to this day.
Inscriptions
1530 Spruce Street,
Philadelphia, Pa.,
February 21, 1944.

This isn’t your birthday, but as I was so far away I couldn’t send you anything last year guess you are entitled to your share now to even up with Stewart.

Haven’t heard from you for a long time. Did you get the book on travel I sent at Xmas. Presume so, but have never received any official word of its receipt. How about a line to let me know.

Guess spring is on its way up there, as it is here, and climate not very different.

Hope everything is well with you, and I hear from you soon. 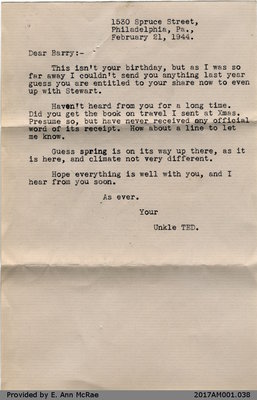