The Snodgrass Residence, also known as Pepper Farm and Grassridge Farms, is located on Bishopsgate Road in Burford. It was built circa 1850 and is an excellent example of a Regency Style Farm Cottage. The home has been in the Snodgrass family for many decades. The Snodgrass Family wishes to restore the home to its former glory. Much of the original features of the home such as the windows, doors and flooring still exist. 1

1844 - Property was prepared for Joseph Smith1

???? - Robert Ranshaw purchased and lived on property operating the farm1

1972 - Drive shed was torn down after dairy herd was sold1

???? - Wall taken down between front lobby and parlour1

2005 - Some existing trim in interior is removed1

Hazel (Riddle) Snodgrass, married to James Snodgrass, looked after the gardens and the children. As well, she was involved in the local Church being Fairfield Plains United Church as the pianist.Her great great grandfather, James Wilson, was one of the original members that started and purchased the property for the church in 1838; the Town of Wilsonville was named after him. She was the first female council member in the local Oakland Township.1

James Snodgrass: Born in 1909 to William and Etta (Pepper) Snodgrass. James Snodgrass was a farmer most of his life and was on the local council for many years. He passed away in 1997.1

The Snodgrass Residence was built circa 1850 by the 3 Smith Brothers. It is an excellent example of a Regency Style Farm Cottage. Andrew Meyers was the original owner of the 200 acres of property on Lot 1 Concession 5. The Smiths and Meyers were responsible for clearing out the land. Of the 100 acres, 10 remained woods, 35.5 were made available for crops, 51.5 for pasture and 3 acres for orchard. The stone foundation consisted of fieldstone that is laid in place and held together by sand and lime having a thickness of approximately 1 inch. Masons would chip the foundation stones while others mix troughs of sand and lime. The fieldstone foundation walls extend approximately 2 feet above the finished grade. Scaffolding for erecting brick walls spread out in all directions. The bricks have been sourced from a neighbouring farm. The first three courses of brick above the stone foundation are laid in English Bond design, acting as a bond timber to strengthen the wall. The remainder of the brick walls are Flemish Bond design. The cottage is constructed with 3 thicknesses of brick with the highest quality brick being located on the exterior wall, the secondary quality being on the interior wall and the unburnt bricks and lesser quality bricks being located on the interior to provide warmth and coldness depending upon season. The walls of the foundation and cellars were worked with hot lime and sand and the rest of the walls above the ground to be of brick work with neat, flat ruled joint. The brick walls were extended approximately 10 feet above the stone foundation. On top of the brick walls, a square beam having dimensions of 14 inches by 14 inches has been secured to the brick wall. The roof truss are notched into the beam and are joined together at the peak using wooden pegs. The boards are affixed to the roof truss and cedar shingles are nailed thereto. The ceiling dormers extend in an east-west direction from brick wall to brick wall. These dormers are approximately 4 inches width by 14 inches depth and are 24 feet in length. This home has never had any dormers or a verandah in the front which is uncommon for the style. The house features all original doors, hinges, and windows – with some panes redone throughout the years. The original large plank flooring can be found all throughout the house with the rear of the house having think plank flooring. The windows are six over six sash double hung with the glass being handmade. The windows used to have shutters on them but they were taken down. The mullions in the windows are thick – ½ inch or more in width and the upper sash is fixed in place. The front door is encircled with lintels. Sidelights surrounding the front door consist of oblong fan light and 3 quarters side lights with 1 quarter wooden panels at the base. The roof is hipped with decorative cornice. On the property there used to be a U-shaped barn which was raised off the ground in 1905. The barn continued to be used as a horse and cow stable until the mid-1950s. After that, only cattle and poultry were kept in the barn. It was eventually demolished in 1972. The other accessory buildings were eventually removed from the property as well: Smoke hut, Ice hut and Poultry Hut. Two chimneys have been removed – one on the north side and one on the south side; both were interior chimneys. The roof originally had cedar shingles then switched to regular shingles. The pitch of the roof is approximately 2.5 to 1 which allows snow to fall freely in the winter time. The interesting thing about the interior is that wallpaper has never been removed – instead there are layers and layers of wallpaper. There is a tin ceiling in the kitchen with led paint on it. The home is knob and tube wiring. All of the interior doors are 4 panel doors with rod iron latches.2 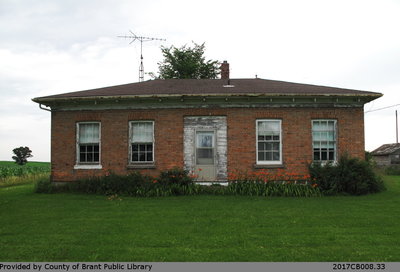