Media Type
Image
Item Type
Photographs
Description
2017AM001.001: Charcoal portrait of Eliza “Lizzie” Pate believed to have been made after her death (b. 1860 – d. 1892) using an old snapshot of her. Eliza was the first wife of James Pate. The original is in the residence of the donor, E. Ann McRae.

2017AM001.002: Photograph of James Pate [left], his (and Eliza’s) son Andrew Wilson [standing behind], and his second wife Mary nee Brown. James Pate is the founder of Brantwood Farms. This may have been a wedding photo. It is estimated that Andrew is fifteen years old, and therefore dates the photograph to circa 1905.

2017AM001.003: Side view of the original site of the Brantwood Farm house and grounds, on the south side of Powerline Road. Two cars are parked in front of the house, with an individual approaching the car closer to the house. There is a white picket fence behind the cars and a gate. Electrical lines runs through the lawn, with a post on the left. The photograph was taken during the summer during the 1940s, presumed by the trees in full foliage.

2017AM001.004: The front and side of the Brantwood Farm house viewed from Powerline Road. There are tall pine trees in the foreground. The photograph was taken during the winter, circa 1945.

2017AM001.006: Mary Herron nee McClure and her husband Andrew Wilson Pate circa 1935. The couple is seated outdoors, in front of trees and shrubbery.

2017AM001.007: a) Snapshots of Barry [left] and Stewart [right] Jones sitting on a tree stump with a white picket fence and full trees in the background. Both are wearing similar outfits of a collared t-shirt, shorts, and shoes. Date 1939 - therefore in England. b) Barry [left] and Stewart [right] sitting in a wagon together on a paved street, with a car, a picket fence, and a house in the background. Dated 1939 - therefore in England.

2017AM001.008: Photograph of Margaret and Howard Jones standing together outdoors, in front of a tall shrub. Margaret is wearing a long floral dress with her hair pinned up, and Howard is wearing a tweed jacket, vest, and pant ensemble with a shirt and patterned tie, and smoking a pipe.

2017AM001.009: Portrait of Stewart Jones wearing a dark jacket and tie with a light coloured shirt. Dated 1946 – therefore taken after he returned to England.

2017AM001.010: Photograph of Andrew “Andy” Pate (b. 1890 – d. 1944) wearing a straw hat and a striped jacket and pants, holding grapes in his hands, standing in front of a full vine.
Notes
The Pate-Jones Collection consists of some photographs of the family members and a large group of letters. The majority of the letters are written by Margaret nee Wilson, and some by her husband Howard Jones, to their sons Barry and Stewart Jones, or to Mr. and Mrs. Pate. From 1940 to 1945 during the Second World War, Barry and Stewart lived with Margaret’s second cousin Andrew Wilson Pate and his wife Mary Herron nee McClure at the Brantwood Farm. The original farm was founded by Andrew’s father James Pate, and was situated on the south side of Powerline Road and Gretsky Parkway, which at that time, was considered part of the County of Brant.

In recent decades, the original Brantwood Farm that was situated on the south side of Powerline Road was sold by the Pate family for development. The farms are now located on the north side of Powerline Road, and consist of several farms belonging to several Pate families, mostly within the County of Brant, remaining a thriving local establishment to this day.
Date Of Event
1892-1946
Local identifier
2017AM001
Language of Item
English
Geographic Coverage
Donor
E. Ann McRae
Creative Commons licence 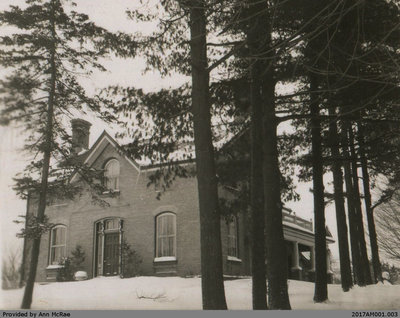