The Old Paris Inn is located at 40 Dundas Street West and was one of the first hotels in Paris, Ontario, built circa 1840. The inn was originally known as the Pater Markey Hotel and has a second floor balcony supported by Tuscan columns that leads to what used to be a ballroom. The construction of highways provided a more efficient way of transportation, but would not take off until the early 1900s. The Pater Markey Hotel gave those traveling for business a place to rest between destinations. In the late 1900s, the Old Paris Inn housed many small businesses. Not much is known of the building’s history between these time periods. Many renovations have taken place over the years. Circa 1870, dividers were added in order to section the hotel into smaller units. These dividers were removed in 1982. The exterior colour of the building has recently changed from white to tan.1

The inn was first known as the Pater Markey Hotel in 1845.2 People traveling along Governors Road would oftentimes stay at the Old Paris Inn.

During renovations on the Old Paris Inn, the dividers that separated the space into smaller units were removed. The Richardson’s operated a business called Old Paris Antiques.

The building colour was changed from white to tan.

Originally a plaster hotel, the Old Paris Inn is a two and a half storey stucco building with a stone foundation. The second floor balcony has three French windows and Tuscan columns, and creates a recessed entryway on the floor below. The building has a medium gable roof with two doors placed asymmetrically on the main façade. One of the main doors has sidelights, as does the main window beside it. The windows are double hung with a flat opening structure. The off center door on the main façade has a bracketed pediment. The building has deep overhanging eaves with decorated frieze. On the interior, there are 1 ½ inch pine floors, plaster walls, and pine trim. 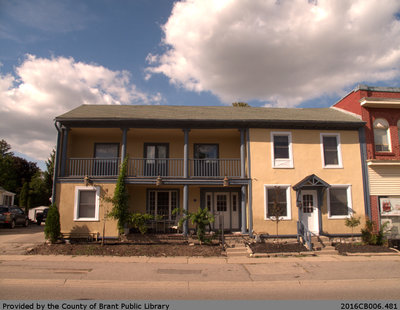