The Davis Farm, located in Burford Township, was first purchased in 1797 by Andrew Meyers. Although it is not certain, it is presumed that Mr. Meyers built the home that stands on the property today sometime during his residency. Ownership eventually passed to Joseph Smith, who owned most of the land surrounding the property by 1858. The Smith’s continued to reside on the farm until 1883, after which the house passed through the hands of various families.2 The redbrick home has multiple attached back units and it is rumored that at one time a bakery operated from here.1 Unique to the home is a Chinese influenced verandah with a pediment over the main entranceway. Because of the homes position to the lake, the farm used to be known by others as Lakeview.2

The area was known as Townshend Gore at the time. It is believed that Mr. Meyers built the home in the years following.

???? – Edward Tyler Purchased the Home and was Acting for the Estate of a Major General Pilington2

Margaret resided at the home with her brother Thomas Smith and other members of the family.

At the time there were five buildings and a large cattle herd that starved later that winter. In 1922 Charles Mott married his housekeeper and the two lived at the home together.

1927 – After Taking out Multiple Mortgages on the Home, Charles Lost the Farm2

The Toronto General Trusts Corporation received the home out of foreclosure and resold it to Frank and Alice Davis.

Joseph H. Smith, born in 1850, was the son of Joseph and Margaret Smith and grew up on the Davis farm. In 1873 he married Cornelia Elliot and had three children. By 1883 he owned a 50 acre farm in the Fairfield Plains area that was prosperous with high cultivation.3

The Davis Farm house features a single rectangular redbrick unit and multiple back additions that are made of plaster and horizontally panelled wood siding. The home is one and a half storeys with a symmetrical layout and center gable. On the main façade, there are four bay windows on the main floor and one main window on the second floor. The bay windows are flat structured with plain trim and are multi-paned. The second floor window features a half-round covered transom with an arch radiating voussoir and keystone. The window has multi-paned flush light side panels, matching those on the front door, and also has an awning. The windows on the sides of the home have flat voussoirs with keystones, and quoins are visible on the corners of the building. The main center door has a flat structure and multi-paned flush light transom with a middle sash and matching side panels. The surround head has a plain pediment supported by square columns. Also on the façade is a rare Chinese influenced verandah with a hipped roof and center pediment.1 It is believed that the verandah is the same as the one originally found in Burford Village on 110 King Street.4 Aside from the pediment, the verandah is supported by decorative wooden tracery. The gables on the home have overhanging eaves with return, and the brickwork is Flemish bond with stone foundation. There is an original redbrick chimney placed in the center and side left, and a newer, joined chimney on the right side, slightly off center.

The Farm also has a barn that is presumed to have been built sometime in the early 1800s. Inside the barn are the original trees that are used as support beams in the ceiling. 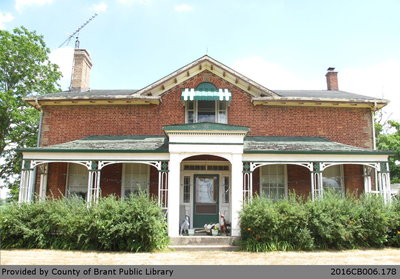