The house was owned by the Jull family from 1904 until the late 1930s when it was purchased by Mr. And Mrs. Clare Robinson. It was used as small apartments for airmen training at the Brantford airport during the Second World War. Following the War, the house underwent significant renovations as it served as a funeral home for nearly 70 years.

John Henry and Ann Jane moved into the house from his farm east of Burford, having retired from farming. John took up carpentry and had a carpenters shop in the back of the house. 1

Ida was John Jull's daughter. She brought her family and moved into the front of the house with her parents after her husband's death. They lived there for only a few years.1

After her passing, John Henry and his Daughter Ida along with her family moved into a house on Alexander St. directly behind this house on Maple Ave South, which John Henry also owned. 1

John's other son, Herbert, and his family moved into the back of the Maple Ave House and lived there for several years. They rented out the front of the house to various families during this time. 1

Mr. & Mrs. Clare Robinson purchase the house before the war and converted it into several small apartments they rented to airmen training at the Brantford Airport. Note #

Some 6 to 12 months after the end of the war the home was renovated yet again and converted into a funeral home. Clare and Mildred operated this business for several years. 1

Russell Allardyce abruptly left the area, leaving the business behind. 1

John Jull was born in Coldhan, Kent County, England in 1805. In 1838 he married Francis Velvick and came to Canada. He lived in Oakland for 3 years before moving to a small farm in Cayuga where their two sons were born: John Henry in 1849 and James Enoch in 1852. 1

John Henry Jull married Ann Jane Winskell in 1869. Sh was the daughter of Mr. and Mrs. Thomas Winskell, who built the house on Maple Ave South. John and Ann moved into the house from his farm east of Burford, having retired from farming. John took up carpentry and had a carpenters shop in the back of the house. 1

The Jull House is a two storey single detached building with significant additions being made to the house as it was converted into a funeral home in the 1940s. The exterior walls are common-bond brick and windows feature arch radiating voussoirs with keystones. A chimney was originally located on the left hand side of the building but is now near the centre at the rear of the building. Roof trim features cornice boxed brackets and the roof itself originally had cresting but it has been removed. The original main door was located in the centre of the main facade but is now covered by the added wing for the funeral home. 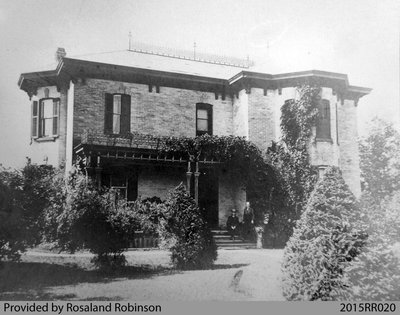