Located in Paris, Hamilton Place is a three storey cobblestone building that was designed by Andrew J. Minney in the early 1840s. The house was first inhabited by Norman Hamilton, who oversaw endeavours in both gypsum mining and liquor distilling. After Norman’s death, the house would later be inhabited by his daughter, Elizabeth Hamilton, and her husband Paul Giovanni Wickson, an artist renowned for his paintings of animals and rural scenes.


The house was designed by Andrew J. Minny7 It is possible that Levi Boughton worked on the house given its distinctive Cobblestone exterior, however no records have been found to say one way or another with any confidence.8

Elizabeth Smith Cooke was from a prominent Massachusetts family8, and the two were married on January 1.6

After the death of his first wife, Norman Hamilton went to a local minister for guidance. Mr. and Mrs. Ebbs had an eligible daughter, that while much younger than Norman Hamilton, was interested in the prospect of marriage.8 The two were married on January 1,6 and miraculously, Elizabeth became pregnant almost at once.8

Elizabeth Hamilton nee Ebbs died June 26,6 after giving birth to a daughter, Elizabeth, so named after her mother.8

Norman Hamilton's third marriage was also arranged by the Ebbs family, who were aware that Mrs. Carruthers had been recently widowed and arranged for her to meet Norman Hamilton. The two apparently took a liking to one another8 as they made their vows on Aug. 23.6

Paul Wickson's paintings of animals and rural scenes are of some renown. Mr. Wickson was active in municipal affairs and was an avid horticulturalist, with a large green house that he tended to. Elizabeth and Paul had two children: Lilian and Norman Jr.7

Elizabeth Wickson nee Hamilton inherited her father’s house and lived there with her husband, the artist Paul Giovanni Wickson.6

It appears that Paul Wickson held a share of preferred stock in the Paris Plow Works, as a letter from the 16 of January, 1902 from said company informed Mr. Wickson that he was being paid a $150.00 dividend.7

The Pattersons took particular interest in decorating the interior of the house, the 'P' etched in the windows above the rear center hall door stands for Patterson. The family was comprised of Dr. Eric Patterson, his wife Eleanor, and their children Graeme and Sandra. They purchased the house from Paul Wickson's Son, Norman. As part of the redecoration, they installed new electrical and heating systems and removed the floor carpets to show the pine floors.7

The Obradovics were collectors of antique furniture and used Hamilton Place to showcase their favorite pieces. 7

Mrs. Hansen is a designer by training and Mr. Hansen is a professor of technology. They remodeled the kitchen, as well as making a new the new coach house and cobblestone driveway8

Norman Hamilton spent most of his life in new York State before moving to Paris. He made his fortune in gypsum mining and distilling liquor, with an additional hog farm on the side. It is said that he fed his hogs with leftover grain from the distillation process.7 He had three wives: Elizabeth Smith Cooke, who was from a prominent Massachusetts family and died at age 50; Elizabeth Ebbs, the daughter of a local minister; and Sarah Maria Wickson Carruthers, a local widow.8

Hamilton Place is a cobblestone house in the Doric style (meant to symbolize masculine features through lack of ornamentation and a thicker column)7 designed by Andrew J. Minney. It was originally the home of Norman Hamilton, an important early businessman, and later his son-in-law artist Paul Wickson; it remained within that family until 1950.1

It was the original site of the Cobblestone Festival.2


Much like the Mitchell House, Hamilton place is noted for its white pillars in the Greek Revival style and its false side door, all touches carefully designed to balance and conceal its structural needs.3 The house's interior is matched with similar antique elegance; its French windows


The house is three stories high, and in its original configuration the verandah roof concealed the second story windows. This placement limited the amount of light and air that could enter through them, so the Patterson family installed dormer windows in the 1940's8. The Doric pillars surrounding the Verandah are actually facades, covering the load bearing wooden logs. The house is symmetrical from all angles, and even boast a secondary, purely decorative copy of the front door on the right side of the house.7


Hamilton Place was built in the Greek Revival style that flourished along the eastern and southern portions of North America. The house was the only house in Paris to be designed by a bonafide architect, an American by the name of Andrew J. Minny, presumably from Philadelphia (though records do no indicate why this is presumed). Built at the height of the Greek revival style, it incorporates all the features that had been perfected on the eastern seaboard of the United States, through less ostentatious than the norm there.


The deep cornice above the square pillars of the porch that fronts that house and continues on the south side; the two simulated cornices (since removed as they caused much trouble with leaking roofs--or were they upper level terraces?) that move back with the slope of the roof, and the beautiful triple hung windows on two sides of the house are typical of the best in the period. The main doorway is an atypical refinement of the usual design. The broad doorway is recessed deeply enough to permit two free standing Doric pillars to flank it.The paneled door has sidelights and a transom topped by an entablature of cut stone. Rather than the standard French windows, a three sash design was implemented, allowing for a six foot aperture at full opening.


A fake doorway was added to the south side in order to maintain the perfect symmetry of the rectangular structure of the house. The doorway is a perfect replica and includes a pseudo-lock even through it leads nowhere. There is also a false window on the north side of the lookout room as well as three false chimneys (since removed) on the roof likewise included for aesthetic balancing purposes. The wing that Mr. Hamilton added several years after the house was initially built blends perfectly with the original, with cobblestone construction that shows the touch of Levi Boughton. The deep entablature of the portico hides the bedroom windows which on two sides look out under the cornice. The two story porch at the back is pillared similarly to that of the front.


Inside the Greek motif is carried out in the pine woodwork of the entire house. The woodwork is pine, however it was painted in a etchnique called 'graining' to make it look like Oak and Burl wood.7 Two double drawing rooms on the right side of the main hall feature windows flanked by pilasters (flat pillars) and topped with a Greek pediment over the entablature. The cornices are very deep and the plaster moldings in the centers of the ceilings are in keeping with the entire elegant scale of the rooms. In the rear half of the drawing room, the dominant note is the carved Carrara marble fireplace. The other fireplaces in the house of of a Rumford design - named for the English engineer that designed the flue that would draw smoke from the room.7 Fine bronze framed mirrors that rest on marble shelves face each other from each end of the rooms, these have been there since the time of Norman Hamilton.


Originally the rooms to the left of the great hall contained a library and a back sitting room with an excellent fireplace. The library has since been turned into a dining room while the sitting room has been converted into a breakfast room and modern kitchen. The original dining room and kitchen were located in the basement along with various pantries and storage rooms. The original dining room has been converted into a sitting room that looks out over the river valley through 24-panneled, deep-silled windows. The previous kitchen is now a recreation room but still contained the great hearth and spit with the oven and wood box. The dumbwaiter used to carry food upstairs now dutifully holds a record player and albums of music.


The upstairs bedrooms have sloped ceilings and low sixteen or twenty paned windows. These apparently did not provide sufficient lighting as extra gables were added by later owners. The upper and lower house cover enough volume to fit a modern house, and the upstairs is joined to the downstairs by a great old staircase with a balustrade or walnut spindles and curved newel posts. This stairway is recessed in order to prevent heat from rising and to soundproof the upper rooms.8 A similar stairway leads to the lookout room which was once an open terrace on the roof. The lookout room has two recessed alcoves on the north and south end and windows that command a great view of the valley. This room was used as a studio by Paul Wickson.


In the northeast wing, built after the original house was completed, the rooms are smaller and less formal and were once used as living rooms by the family. The ceilings are 12 feet high and the floors are 1.5 inch thick plank.


Last but not least, we have to mention the unique construction of the house. The framework is 15 inch rubble-stone, but the facing is much more interesting. The cobblestones used to make the exterior walls meant that construction was slow and labor intensive - the stones that were collected had to pass stringent criteria with regards to their size and coloring. Most stones were five to six inches long, but occasionally a nine inch stone was used to anchor the cobblestone facing to the underlying framework. When the time came to integrate the cobblestone into the wall, Boughton and his crew would begin by applying a layer of slaked limestone mortar upon which the first cobblestone row was laid one at a time, with only the tip of the stone poking out from the mortar. The inner part of the stone was tilted down slightly, and sometime the stone was tilted on an angle - this last feature was a trademark of Boughton's. The process would then be repeated and the walls built up. At this point the builders would go back with a board and put a triangular ridge between rows of cobblestones. Unfortunately, the stones were so heavy that they could only lay four rows at a time - they then had to wait for the mortar to harden or the construct would droop. 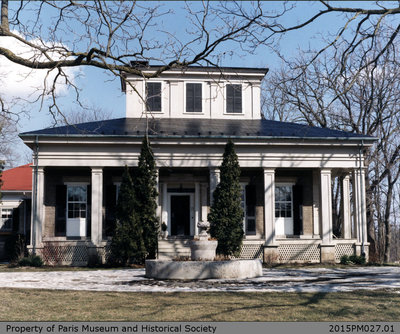