Creator
Robertson, Mel, Author
Media Type
Text
Item Type
Articles
Description
From the 1970s through the 1980s, Mel Robertson wrote many articles for the Burford Advance and Burford Times on the history of Burford Township. This clipping contains the article Dos and Donts'. It describes parenting and relationships between children and adults in Burford in the 1920s. The article may not have been republished.

BEFORE THE CHARTER of Rights and Freedoms took away the "right" of adults to criticize the action of children, the lives of most children were ruled by a long list of" Dos" and " Don'ts". These in many ways reflected the social life of earlier times. For example, there was strict sexual segregation of children in school and church. Corporal punishment by public school teachers, Sunday School teachers and parents was condoned and children's activities were governed very strictly in many ways. I was one such child and I do not know if the strict regulations that governed my early life made me a better or worse adult. I do not praise many of the regulations I had to follow nor do I praise the Charter of Rights and Freedoms.

Probably the best place to start this article about"dos" and "don'ts" would be when a child got up in the 1920s. Then the first warning he or she would receive was " Be sure to wash behind your ears". Then they would be ordered to "fold your socks". This last warning was due to the fact that all kids of those days wore long underwear in winter and many families considered it would be a social disgrace if their kids went to school with big lumps of long underwear showing through their long black woolen socks. Other indescribable morning warnings came from the lack of indoor plumbing in most houses and the use of chamber .pots. These facilities invoked certain cautions which I will not try to describe. The next set of warnings came with breakfast, such as "eat everything that is put in front of you", "don't talk with your mouth full", and " don't dawdle or you will be late for school".

At Burford Public School, the first order on entering the school would come from the ever vigilant caretaker who stood at the door telling you to "take off your cap and shut up", or he would hand you a broom and tell you to "sweep off your boots and shut up". Then you would hang vour coat in the cloak room, put your "book-case" on your desk and" hurry to join the sexually segregated military parade in the hall. There you stood with your hands behind your back and " kept quiet". In due course the principal would appear and shout out a portion of Scripture and the Lord's Prayer. Next, he would give his "warnings of the day" which were always followed by the threat of "Take a hint, I say, take a hint". Someone then played a march on the piano and we went to class with arms tight to our sides, high-stomping feet and stony faced silence.

In class we stood at attention by our desks until our teacher ordered us to sit down and put our hands behind our backs. Classes proceeded from there with each class marching to the front of the room and "reciting" the lesson. Complete silence was enforced and any child who did not know his or her lesson was given "a good shake". Then we marched back to our desks and sat down.

"Whispering" was a capital offense that merited a couple of whacks with the strap or "a good shake". Hand signals were used. One finger was a request to speak to the teacher, two fingers was a request to leave the room and go the horrible back-house. I don't remember what three fingers meant but it probably had meaning similar to the modern " middle finger salute".

At 10:30 a.m. and 3:30 p.m. we had a 15-minute "recess" on sexually segregated playgrounds. The school day ended at 4:00 p.m. but we did not rush to the cloakroom but waited until the teacher said "dismissed and go straight home". Going " straight home" was very

important in those days before school busses as both parents and teachers did not want kids to " dawdle".

At home you had to ask your mother if you could go and play with someone. If permission was given it was accompanied by the words " come straight home before supper". The word "straight" was very imperative and you never " dallied" when it was used.

At supper another set of orders took effect. These included "don't talk with your mouth full", "sit up straight", "don't butt into conversations", "don't fuss over your food"," don't burp or fart at the table", " speak when you are spoken to" and "chew everything 30 times before you swallow it". I don't know if all those orders ruined a kid's appetite but most of the kids I knew "only had to be told once".

Bedtime brought another set of "dos" and "don'ts". "Wash your hands and comb your hair" was often heard. Then, "Be sure to say your prayers" was an important order which in some houses required kids to include every aunt and uncle, cousin, friend, school chum, teacher, etc., etc. The idea of such remembrance was, of course, excellent but when a kid had to lie there counting off Aunt Fanny, Uncle Will, cousin Fred, the hired man, the school teacher, the Sunday School superintendent, etc., etc., etc., a child was apt to think that if he missed anyone Divine Retribution would follow. Indeed, going to bed in many houses was a complicated ritual when events of the day had to be recited, stories were read and high moral precepts were taught.

Going to Sunday School involved some serious warnings, chief of which was "Never ask another kid how much "collection" they would give" and "Never question the Sunday School teacher".

This brings to mind a time when I was a 10 or 11 year-old boy in a Sunday School class at what was then Burford Methodist Church. It was a class of about

teacher was a well known Burford man who lectured us every Sunday on the sexual theories expounded by the Mr. Kellogg of Corn Flakes fame who had some unusual attitudes toward sexual relationships which we did not understand. Fortunately, the Kellogg ideas we were taught did not include his theory that people should have five or six enemas a day. However, Sunday AFTER Sunday, we were told that certain sexual practices would make us become blind or insane and that, if we hoped to be successful in life, we should avoid association with women. Most of us were completely ignorant of the facts of life as they were not discussed openly by parents. Consequently we were completely confused with these Sunday School lessons for, if we asked our parents, we were told to "never mind". Looking back at this I often wonder why some parent did not complain to the Sunday School superintendent. All I can say is that most of the boys became successful fathers and family men who had happy relationships with their wives. As to the teacher, he was a married man with a family when he was giving us this crap so I have to wonder if he was trying to inflict some marital difficulties of his own on his Sunday School class.

My personal recollections of childhood Sundays are not particularly happy for my father was a very strict Scottish Presbyterian who would not allow running or whistling on "The Sabbath". Church attendance three times a Sunday was necessary and no books but the Bible could be read. Playing games was taboo and

swimming in the creek on a hot Sunday was considered to be a capital sin. Playing of any kind of card game was condemned as a "Deadly Sin", as was dancing. Many other local kids suffered under the same list of" don'ts".

One particularly severe "NO-NO" of my childhood was "Never talk back to an adult". This was considered to be such a serious offense at the time that parents would permit an adult who had been " sassed" by one of their kids to give him or her "one alongside the ear" and to grab the kid by the ear and bring him or her home for further punishment. Kids of the time resented this and I often wonder if the present laws preventing such action were sponsored by people who had endured " one alongside the ear" as a child.

Going to kids' parties involved "dos" and "don'ts", first of which was "Never try to get the biggest piece of cake or candy but take the piece next to you". As a kid I always thought that the word "next" meant the piece beside the one nearest you. Other NO-NO's included "Never ask another kid what present they had brought" and never laugh if in a "Pin the Tail on the Donkey" game some "precocious" kid put it in the wrong place. The "Eat what is put before you" rule was also strong as was the "Don't speak when your mouth is full" admonition. In addition, kids were told never to question the choice, quality or quantity of the food they were offered.

One frequently heard taboo of 1920s' childhood was the warning "Don't get your feet wet" whenever a kid went outside in summer or winter. This was probably due to the fact that, in those days, houses did not have facilities to dry wet shoes and most kids did not have extra pairs to wear. Kids regarded this warning with great seriousness, particularly in winter. I recall one winter when I was about 11,1 was skating on the Dead Pond a mile north of Burford. I got one foot wet. I changed from my skates as fast as I could and ran the mile home to Burford. This was the typical reaction for kids of the time as we feet that Rettine, our fept

wet in winter would result in being turned into a frozen statue and that dogs looking for a "necessary place" would come and sniff around our icebound ankles.

Personal relationships had a number of "dos" and "don'ts". The most frequently heard were " Get out from under my feet", "Don't make personal remarks", "Don't talk when an adult is talking", " Don't cry if you get strapped at school" and "Don't refer to your father as my old man". There were a couple of admonitions that were unusual. One was for boys - "Never scratch your bum in public" for other kids would yell "Butter's cheap". This was due to the belief that an excessive use of butter caused rectal itch. A yet more unusual " don'f' was " Don't run under a horse". This was due to the fact that, in the 1920s, Burford streets were lined with tethered horses and rigs and it became a silly bravado for a kid to run between the front and back legs of a horse. This was a sensible "NO-NO" for a child could have been seriously injured doing this "stunt".

So these are a few of the "Dos" and "Don'ts" that governed the lives of 1920s kids. Today they would be condemned or laughed at. However, they reflect a time when parents were " on the top of the heap" and not the reverse that exists today. If either position is good or bad, I leave it to you.

I would like to thank the readers who made suggestions for use in this article. I remember most of these "warnings" with amusement. 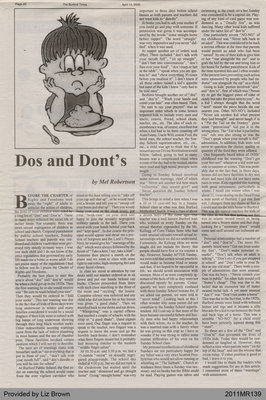