Creator
Robertson, Mel, Author
Media Type
Text
Item Type
Articles
Description
From the 1970s through the 1980s, Mel Robertson wrote many articles for the Burford Advance and Burford Times on the history of Burford Township. This clipping contains the article Out After Supper. It describes life and customs of Burford children in the 1920s. The article may not have been republished.

IN THE FORTY or more years that I have tried to record local history, I have written approximately 60 articles on the lives and customs of 1920s' children. Many of these have been inspired by readers of the "Advance" and "Times". Some suggestions have been printable and some unprintable. Every now and then I reach a point where I think I have exhausted my memory bank and that of my readers. Then readers will suggest something they have experienced as children, and I will try to make it into an article.

A recent example of this was when a reader asked me why I have never written about that brief time in all our 1920s' Springs when we cast off the shackles of winter and were "allowed out" after supper. This was a brief but very special time in our childhood. However, before going into the details of our "after supper" activities, it is necessary to look into the customs of the times that made "going out after supper" in the 1920s so important to a child.

In most families, the father was the overall boss of the family, exerting his influence in many ways over many things. In the house the mother was the boss, setting the standard of household behaviour for children. Both exercised great influence over when meals were eaten and when children got up, went to bed and how they spent their time.

In the 1920s, there was no electric refrigeration and few homes had ice-boxes. There were no "quick-food" frozen meals available in stores and thus all meals were hot meals. Meal times were rigid with breakfast at 7:00 or 7:30, dinner at 12:00 and supper at 6:00.

No one but immigrants from the British Isles called the evening meal "dinner", and any person who referred to the noon meal as "lunch" or "luncheon" was apt to be laughed off the street. Yes, meals were rather formal with father at the head of the table and mother at the opposite end. Grace was always said and children received instructions on basic good table manners.

So, you may ask, why do 1920s' meals have anything to do with "going out after supper"? Well, in the 1920s, radio was in its infancy and one of the most popular radio shows was "Amos and Andy", which came on for 15 minutes at 6:45 and at 10:45 every weekday evening. This was a comic show about two Afro-Americans, Amos and Andy, who ran a company. Most of their clients were less-than-intelligent non-Afro-Americans on whom Amos or Andy exercised their comic talents. Such a show would not be allowed in 1996 "politically correct" society, but it was typical of a time when people of all ethnic backgrounds still retained that very important talent of being able to laugh at themselves. Consequently, this show was very popular.

Most radios in the 1920s were battery-operated and therefore people did not have them on all the time as in 1996. Batteries were expensive and radios were only turned on when important shows such as "Amos and Andy" were aired. Adults wanted to have the decks cleared for the 6:45 p.m. broadcast and consequently supper become a quick meal and if kids asked for permission to "go out after supper" in the early Spring, this was readily granted, in case their in-house static

exceeded the static on the radio and dampened the adults' appreciation of "Amos and Andy". Keeping kids quiet for 15 minutes in the winter could be a problem, but when early Spring "after supper" time came, it was easy for adults to let the kids go outside.

What was "out after supper time"? Well, it was that time in the early Spring when the year had advanced to a point where there was an hour of good daylight after supper. It was rather a magic time for kids as the snow was off the sidewalks and there was no need to put on heavy galoshes and scarves. Long woolen winter drawers still bound us, but we felt semi-liberated from winter's "thrall". Every day as the year advanced, word would go through the "playground telegraph" that on a certain evening, kids would congregate for "out after supper" fun. No one said that it would be "next Tuesday"; we just knew that it would take place on a certain night and when we appeared at 6:45 on that night, we knew that all our friends would be there.

So what did we do when we came out "after supper"? Well, in the sexually segregated society of the time, the girls skipped either singly or with "the long rope". Now and then some "smart-ass" boy would try to skip with the girls, but both sexes would jeer and reject him. Boys played mostly running games involving "tag" in its multi-forms. Sometimes, in defiance of all parental warnings about "don't get your feet wet", yelling, circling running games would infringe on the Royal Bank lawn (now the Township Office) and Harry Bowerman, the bank manager, would order us off the sodden turf. At other times, all we did was congregate around one of the fancy wooden lamp posts at the corner of King and Maple and brag of things we knew nothing about. None of this is very exciting by 1996 standards, but since we did not have computers, the Internet and Nintendo to make us intelligent, we had to make the most of what little there was.

It was sort of a "freedom" thing like the freedom of slaves we saw in the many "Uncle Tom's Cabin" shows that travelling actors brought to the Barnea Hall. However, our freedom had some restrictions. One of these was not to go into anyone's "back yard" for there was mud, and any accumulation on our

parents and dire predictions that we would be sure to get the "Quinzey". Another restriction was not to cross the street. This was a sensible restriction for in the 1920s, King Street was not paved and there were deep mud holes between the strips of gravel. Therefore, our intercourse with the kids on the south side of the street consisted of yelling insults at each other... "My dad can run faster than yours", "So's yer old man", "I dare ya to come over", "My dog can lick your dog", and other highly intellectual comments we would not think of yelling at any other time of the year. Sometimes a motor car would go by and we would speculate as to what make it was and if it could "go like sixty". Occasionally these cars were the big Hudson and Studebaker touring cars used by Burfbrd's bootleggers. When these came by, we recoiled in fear for we heard that the drivers carried revolvers.

Sometimes new kids would throw things at passing cars but found out very quickly that most drivers would stop and give them a good "shake".

At about 8 o'clock when the light began to fade and the chill air moved in, we would all "with one accord" go home. There, any "homework" was done and the "getting ready forbed" routine began. This, in marry houses, included the reading, or telling, of stories. In other houses, children were urged to tell about their "time out after supper". In this way, parents would find out who was "bullying" whom, who was throwing stones and who was trying to get "funny" with the girls. This information would pass quietly through the adult version of "the playground telegraph" and eventually would reach the ears of the parents concerned.

After all this "getting ready forbed" routine was accomplished, we would say prayers for everyone we could think of. Then the lamp was put out and we were left with the shadows on the ceiling that the feeble street lights cast and another night "out after supper" would come to an end.

Was anything accomplished by our "out after supper" activities? The answer is probably very little. So why have these times remained in the memory of so many older people as happy times? There is no modem counterpart, for central heating, fast food, computers, arenas, etc., have destroyed the impact of the changing seasons for kids of 1996. Electronic intelligence has made modern kids scornful of anything so "uncool" as playing "tag" on the street and yelling unscientific things at other kids.

However, in defence of our unsophisticated way of life, down-the-nose critics must remember that in the 1920s many Burford houses did not have electricity and thus the "after supper" real daylight after a long winter was a treat. To those who will say that 1 am trying to praise "the good old days", my reply is that I certainly am not. We all appreciate many of the wonders of the electronic age and deplore others. I will say, at the risk of scorn and criticism, that the kids of the 1920s could count to ten when the power was off and could spell most of the words they used. Moreover, they knew a great deal about "mouse" to us was merely a little creature who ate cheese and not a device whereby we could learn how to steal General Motors cars. By comparison, we were a pretty stupid lot. but will kids sixty years from now remember how they destroyed someone's computer program with a "virus" with the same pleasure we got in going "out after supper" and yelling "you're it" on King Street?

I suppose that some explanation of the "out after supper" joy should be given. I don't know the real answer, but I suppose it was the 1920s' child's version of the way our animal friends came out of hibernation. Let's leave it at that even though to this day I don't know if "your dad could run faster than mine". I do know that my dachshund "Betsy" can "lick any dog in town" with a kiss on the nose. 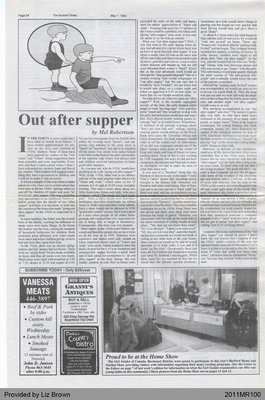