Creator
Robertson, Mel, Author
Media Type
Text
Item Type
Articles
Description
From the 1970s through the 1980s, Mel Robertson wrote many articles for the Burford Advance and Burford Times on the history of Burford Township. This clipping contains the article Sunday School Picnics. The article may not have been republished.

DURING THE PAST 40 years, I have written a number of articles about picnics of many kinds. These have ranged from the simple family picnic involving about a dozen people to the gigantic picnics the area Sunday School Association ran at the turn of the century that involved thousands of people and special trains. Sites have ranged from the little "island" at Whiteman's Creek north of Burford (now part of Lions Park), to parks at Niagara Falls, Grimsby and Port Dover. Arrivals have ranged from simple walk-ins to grandiose entrances led by Andrew Messecar and the Burford Brass Band. Entertainment has ranged from "Cinematic Views of a Trip to China" at Grimsby, a few "lagers" at Niagara Falls, New York, to games of squat-tag in a clover patch. Food has been anything from a "mess of fried cat fish" to English crumpets and Devonshire cream. The age of participants has ranged from the age before people could walk to the age when they couldn't. All in all, picnics have presented a vast and colourful panorama.

However, among all this, I seem to have missed the 1920s Sunday School Picnics that gladdened the summers of so many children and young adults. In writing about these happy events, we must first examine the time in which they took place.

First we must remember that in the 1920s, there were no organized summer and winter sports programs for children and young adults. The only organized activities took place in either the church or the school. In schools, the "Home & School Association" took an active interest in the non-academic life of children, while churches provided Sunday school classes, libraries and Young Peoples Associations. However, in between these two institutions, the community offered nothing and children and young people were left to their own resources. Consequently, a Sunday School Picnic was a major event of the summer.

Sunday School picnics were not spur-of-the-moment events like family picnics. Planning began in the Spring when the location was decided. Then it was necessary to determine if the park concerned could handle the picnic on a certain date. Sites had to be within short

driving distance and this limited the choice to Mohawk Park in Brantford, Southside Park in Woodstock, or Soper Park in Gait. All of these parks provided similar facilities such as a booth where a limited variety of things like ice cream cones, peanuts, chocolate bars, etc., could be purchased by the few kids who had any pocket money. There were, of course, none of today's out-of-hand food such as potato chips, pizzas or tacos. Swings and slides were needed for younger people, while older ones liked to rent boats. The most important requirement were big lawns where kids could run and lots of trees and benches where adults could "take the air".

Mohawk Park in Brantford had most of the needed facilities, but a lot of kids did not like it because Brantford kids took such pleasure in calling us "a bunch of hicks".

Southside Park in Woodstock had the added pleasure of a little lake and a boat house where boats could be rented. However, it had one drawback in the form of a nasty park supervisor who would yell at, grab, shake and threaten "to take you uptown" for any infraction his little mind could think of. I recall one Sunday School Picnic at Southside when I was about 10. Three or four of us ran over the main bridge on the way to the boat house. We were not interfering with anyone, but this jerk yelled at us to stop running. He grabbed me, gave me a good shaking and threatened to "take you uptown to the police". I don't remember the name of this person, nor would I want to, but all the kids considered him to be "the east end of a horse going west". However, if you could avoid the jaundiced eye of this crackpot, Southside was a nice place for a picnic.

Soper Park had the advantage of being the farthest away and, for kids who never went far from home, it was an ideal place with all the facilities and kind and helpful attendants.

Transportation to a Sunday School picnic was usually in Walter O' Reilly's open truck. Walter, who will be remembered by many older people, ran a weekly delivery service to Brantford and London where he picked up orders Bur-ford merchants had placed with wholesale houses. Walter was a very jovial person and his business was an efficient one. His truck had an open body and benches were placed in it to accommodate riders. There was no rain protection although a tarpaulin was available if needed. The benches were not padded and, since the roads were not paved, sore bums were part of the trip. However, no one worried about these things for the usual thing was to sing songs or give school "yells" like "One-Two-Three-Four Who are we for? B-U-R-F-O-R-O That's the way you spell it and this is the way you yell it, - BURFORD!" Some people in little places did not like our yells and would throw things at us. This was all part of the trip and, despite the inconveniences, kids who could have traveled in the comfort of their parents' "Chevy" begged to go on the truck.

As soon as the truck arrived at the park, everyone spread out in all directions seeking the marvels of the place. This did not last long for soon adults would begin to circulate yelling "Hurrah" which was the universal expression at the time that meant "let's eat", "soup's on" or any of the other expressions that meant "let's go". People came running from all corners of the park to be greeted by a long table set with plates of sandwiches, salads, pickles, dishes of little tomatoes, cakes, tarts, pies, etc. In big pitchers was lemonade and thermos bottles were ready to provide coffee or tea. After "Be Present at our Table Lord" was sung, everyone pitched in. Looking back, I cannot imagine the great amount of work involved in getting this meal ready and the ingenuity involved in getting it to the park on a hot day before refrigerated ice boxes were available. Sandwiches and salads would have been made in the cool of the dawn and put into cellars or other cool places. Then they would be wrapped in cool towels for transportation. There they were all fresh and tasty and I never recall that anything was "whingy" or "a bit off. I never heard of anyone getting food poisoning, but then maybe our stomachs were hardened to unrefrigerated food or we didn't know all the big words. Maybe we should have suffered from gastritis, but I can still recall the taste of those salmon sandwiches and those deviled (at a Sunday School picnic already!) eggs. Nine-day pickles were there in abundance and to bite into a little

tomato with salt on it was a real treat.

After lunch, everyone lolled around for an hour or so belching politely and recalling how, at a certain picnic, - - had eaten eight butter tarts. Then, after our stomachs had "settled", the Sunday School Superintendent, in his black three-piece suit (no casual summer clothing was available or in use), would try to organize three-legged races, egg-on-spoon races and tug-of-war. This was not an easy task, but everyone expected that there would be "a sports program" and kids who were "too full" to run were pushed into competing. Then, finally, when the day "began to lengthen", the pastor would call everyone together for thanks and three cheers to the organizers of the day. This was intended for the women, but the men put their coats back on and pretended that they had done some of the work. Then, before we knew it, we were back on the O'Reilly truck and heading for home.

The trip back was not as exciting as the trip to the park for most kids were too "pooped" with all the running and eating. To keep us amused, the adult in the truck would organize "part songs" and then we were home again rubbing our sore bums and scratching our mosquito bites. Grandmothers and "aunts" came to greet us and we filled them with stories about what we had done. Then, it was to bed with happy thoughts of another Sunday School picnic.

In closing, I imagine that some people will say that I am praising "the good old days". However, "praise" is not the word I would use. Instead, I would use the words "amaze", "amazement" and "amazing" to describe the imagination, skill and ingenuity used to create such happiness in such unrefrigerated and unairconditioned times. One of the amazing things that I can recall is that no one seemed to think that they had done anything unusual or that they deserved any thanks. It is also amazing that so many older people still remember these simple picnics. 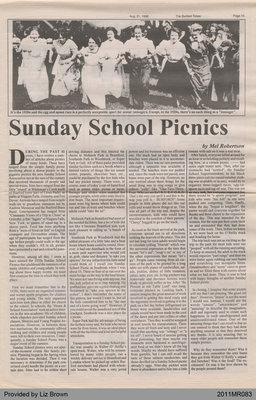