Creator
Robertson, Mel, Author
Media Type
Text
Item Type
Articles
Description
From the 1970s through the 1980s, Mel Robertson wrote many articles for the Burford Advance and Burford Times on the history of Burford Township. This clipping contains the article The Games of Marbles describing outdoor marble games in the 1920s. The article may not have been republished.

The Games of Marbles

IN A RECENT ARTICLE on the "in-between" season of a 1920s' Bur-ford childhood, I mentioned the games of marbles as one of the ways boys of the time filled in the "blah" space between winter and spring. Indeed it was an almost "religious" activity since marbles dominated our lives for a brief time each spring and were not played at other times of the year.

It is doubtful if 1996 boys play any form of marble game for the electronically sophisticated boys of today would consider such activity as not being "cool". However, this is for those who remember and those who would like to know how little boys put in their time before they became interested in learning how to create computer "viruses" and how to "make out" with girls. Maybe not a better time, but certainly a different time.

"Marbles", to the uninitiated, was a series of simple games played with little balls or pellets made of glass, stone, metal, brick, wood and (you guessed it) marble. It is a very ancient game sketches and manuscripts. Indeed the name "marble" and the word "alley" are thought to come from the fact that early "marbles" were made from chips of marble from a stone cutter's shop and that the word "alley" came from "alabaster", which is the name for several varieties of carbonate or salivate of lime - a much used material for decorative carvings in ancient times.

Marbles existed in several forms. The top of the list was the glass "alley" which came informs called "pures" and "half-pures". The "pure" was made of glass with intricate coloured "swirl" designs in the centre. It could vary in size from that of a large plumb to that of a small grape. Glass "alleys" were the prized possessions of 1920s boys and were used for bragging and not for play. Indeed they were seldom shown to strange kids lest they be seized and taken away. "Half-pures" were smaller than "glass alleys" and did not have the "designer" swirls of colour in the middle. Rather, the colours existed all through the "half-pure" and most were about half the size of a "glass alley". "Half-pures" were not held in as much esteem as "glass alleys" and could sometimes be risked in games where they might be lost to a more skillful player. In other words, the loss of a "half-pure" was not considered to be on a par with a loss of virtue, but merely as a bit of bad luck that would correct itself in time.

Some kids even seemed to encourage the use of "half pures" by rolling and clicking them in their hands. This was a most annoying practice and people who remember the film "The Caine Mutiny" will recall that the villain of the piece was a naval captain, a a couple of steel balls or "alleys" in his hand which he rattled incessantly to the annoyance of everyone.

The basic "marble" was a little thing made of hardened clay or something. It came in several colours and was round to a degree. They could be bought for a few cents every spring from big foreign-looking bags that all merchants displayed. I don't know where they were made or who made them, but from their cheap price and poor quality, I always imagined that they were made by grossly underpaid people or by criminals in Chinese jails who got nothing for their labours. "How-

ever, since social-consciousness had not reached little boys in the 1920s, we all carried small muslin bags with drawstrings that contained a couple of dozen marbles.

The first marble game each spring began when some kid flopped down on the coal dust-covered floor of the Burford Public School basement, put a glass "alley" of no particular value behind a concealed bump in the floor and loudly challenged anyone to hit it. Everyone with marbles would rush in dreaming of colossal "wins". However, after a few dozen marbles had been hurled at the glass "alley", the wily kid who had set his "alley" where no one could hit it would announce that he had been suddenly "taken short". He would then gather all the marbles that had collected in his crotch and run off with his ill-gotten gains. Sometimes this trick would not work and the losers would collect their losses with their fists. This basic marble game was even played at BHS in that stinking basement room where the parallel bars were kept. It would be hard to imagine such "un-cool" activity in 1996 BDHS where boys would rather lie on the hall floors listening to ear-cracking "heavy metal" rock music than collecting a few marbles.

The first of the early spring outdoor marble games in the 1920s was one in which a hole was gouged in someone's lawn and marbles were thrown at it. The marble that went in the hole won all those who didn't. These games were usually of short duration for the owner of the lawn where the hole was gouged would always come out and yell "you kids geddoffa my lawn" and that would end the game. Another popular marble game was played against the wall of the building east of the present Township office. In this, marbles were tossed against the wall and the one that bounced closest to the wall won all the others.

Other simple "marbles" games consisted of one player trying to guess how many marbles another kid had in his hand, or if the number was odd or even. However, there was one very difficult marble game whose proper name I do not have. It consisted in drawing a circle on the ground and placing a glass "alley" in the middle. The idea was to shoot marbles at this "alley" by a method the dictionary calls "fulking" or "knuckling". In this, the "shooter" marble was placed against the thumb was used to flick it toward the "alley". This game had several strict rules, one of which was the shooter had to "knuckle down" with his closed hand tight to the ground. Anyone who did not "knuckle down" was put out of the game. I don't know where this game originated, but the dictionary says that it had its start in ancient times when the knuckles of sheep bones were used in one way or another. Few Burford boys of my childhood were adept at this game but older men, like my father, used to talk about it. I don't know the origin of the term "fulking", but it appears in Patrick Beaver's book on "Victorian Parlour Games", so I presume

that it was English in origin and was derived from something else. Other unusual words for marbles were "Taw" or "Dib" which seem to have survived only as three-letter words in crossword puzzles.

The playing of marbles "for keeps" was condemned in some families (including my own) as some parents felt that it was a form of gambling that would eventually lead the practitioners down the road to "dens of vice and gin". Consequently, any marbles that were won had to be given back to the losers at the end of the game and, if five or six players were involved, this was a considerable task. However, some fathers considered it to be a family disgrace if their sons were losers in marble games. This was a point of family pride and the term "have you lost your marbles?" can still be heard as a "politically incorrect" description of any sort of failure.

Playing marbles in the 1920s was a strictly male game and no little girl who fancied herself to be a "lady" would have anything to do with any games involving marbles. Little boys would have recoiled in horror if a little girl tried to get into a game of marbles. Other little girls would swear that they would never speak to such a person again and mothers would come roaring out of their houses quoting Emily Post, the Bible and the Saturday Evening Post if they saw their daughters trying to "knuckle down". Such was the spirit of the times.

Marbles were a form of collateral in the early days and little boys prized them like gold. To illustrate this, I can quote a little story from my family history. In 1861, one of my forebears was seven-year old Noah Petit. One spring day, while walking to school, he got his feet wet. The school master would not let him sit by the stove to dry his feet. He became terminally ill with pneumonia and, the night he died, he called his brother Niram to his bedside and said, "I want you to have my money". He gave him a little hinged metal box containing a homemade violin bridge, a couple of little Spanish coins and a number of little glass "alleys". These were his treasures. His brother wore the coins on his watch chain all his life and we have kept the little tin box with the marbles as part of family history.

It is doubtful if any 1996 boy plays would condemn it as an "unstructured" activity and "organizers" would condemn it as "unorganizable" (how's that for a word?). Big "pure" glass "alleys" are sometimes seen in antique shops, but simple marbles are seen no more.

Did the boys of the 1920s learn anything from playing marbles? I can't think of anything unless it was how to persuade other people to risk their "marbles" in questionable ventures, or was it how to make something out of nothing? Is such knowledge of any value in 1996? 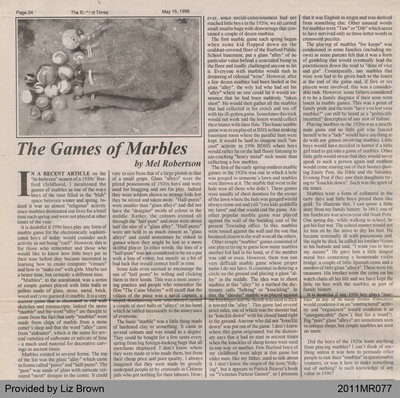