Creator
Robertson, Mel, Author
Media Type
Text
Item Type
Articles
Description
From the 1970s through the 1980s, Mel Robertson wrote many articles for the Burford Advance and Burford Times on the history of Burford Township. This clipping contains the article "Alice and the Aunts". The article may not have been republished.

Alice and the Aunts by Mel Robertson

One hundred and sixteen years ago this summer; on July 4th., 1862 to be exact a little boating party set out from Christ Church College, Oxford, England on an expedition up the Thames to Godstow. There they planned to have tea on the bank and drift back to Oxford before dark.

The little group of mariners was a rather distinguished one for it included two eminent gentlemen as oarsmen - the Rev. Charles Dodgson, a mathematician and photographer who lectured at Christ Church and Canon Duckworth, also of the college. The passengers were three little girls - Lorina aged 13, Alice 10 and Edith 8, all daughters of Dr. Liddell, Dean of Christ Church.

There was nothing special about this particular excursion, for Godstow was a popular picnic spot and Dodgson had taken the three Liddells there on many occasions. It was a leisurely three mile trip between leafy banks, which was so effortless that Dodgson always enlightened it with fairy stories he composed as they dipped along. Many tales were invented but none was written down. They lived and died, each in a summer's day, like butterflies and day-dreams. However, on the "golden afternoon" of July 4th., 1862 Dodgson made up a story especially for Alice and the child was so entranced that when they returned to Christ Church in the evening, she asked him to write it down.

Writing forty years later, Canon Duckworth described the telling of the tale and how Dodgson spoke it over his shoulder to Alice as he rowed, conjuring up characters when he needed them from the occupants of the boat. Dodgson, himself, was the Dodo, Duckworth the duck, Lorina was Lory and Alice, of course, was the little Alice of the tale. No title was given to the story at the time but when he wrote it down for Christmas 1862, Dodgson gave his whimsey the name "Alice in Wonderland" and published it in 1865 under his nom de plume" of "Lewis Carroll".

Happily, the original handwritten story is preserved in the British Museum with Dodgson's photograph of a grave, little dark-haired Alice looking out from the final page.

Dodgson was fortunate (although he refused to recognize his fame as the author of children's stories) in that he lived to see his fantasy of a summer's afternoon become a classic which far outshone his success as a mathematician and photographer. He died in 1898. Alice Liddell became Mrs. Reginald Hargreaves and survived until 1934. It would be nice to imagine that the friendship of the shy professor and the little girl lasted throughout their lives, but, in fact, Alice's mother discouraged their friendship in later years. However, let us hope that Alice retained throughout her life the hope Lewis Carroll expressed in the final paragraph of "Alice in Wonderland"...that she would keep the remembrance of "the happy summer days".

"Alice in Wonderland" may be unfamiliar to many and its whimsey meaningless to others. Nevertheless, to those who remember the days when friends of their Mother could be their "aunts" without incurring Freudian scorn, the story of Alice's adventures underground will recall many little tales of a summer's afternoon that lived and faded with the shadows on the lawn.

.For my own part, I had four real aunts and several "honourary" aunts who were not related to me in any way. They were all aunts in the true sense though and by that I mean people who took notice of children, remembered birthdays, were kind, and if you asked them, would drop whatever^ they were doing and make a lunch of peanut-butter sandwiches and raspberry vinegar for a hike to the creek. All my friends had aunts of this type and we called them aunts because we weren't sure of their real names.

None of the aunts ever seemed to do any work although I know now that they ran households of their own and worked extremely hard. We never saw them in the morning but in the afternoons they arrived in raw-silk waists, fancy big skirts and large garden-party hats. They never seemed to hurry or fuss nor did they shout, perspire or get dirty faces. In fact they seemed to spend their time being kind to children or taking bunches of Sweet William to the cemeteries. Some were married and some were not. As I recall the married ones did not have children of their own. However, their married status was inconsequential to us. They never seemed to lack money or to worry about it. Their daily round was so ordered that their afternoons were free to make up stories for children and to remember things. Their minds were like card-index files with all birthdays, holidays and anniversaries carefully noted and children could count on some sort of remembrance whenever there was a special day. On Halloween they dressed up like Hindus and helped at parties or went out door-to-door with younger children. On St. Valentine's they made fancy cards, slipped them under your door and were off before you could answer the bell. When birthdays came they were there with their pince-nez glasses balanced on their noses making paper streamers devising treasure hunts and organizing games. Sometimes they would take their turn at being "It" and would stagger about in "Blind Man's Bluff". At Christmas and New Year's their original presents and tricks were always in evidence.

As far as I can remember none of my aunts ever preached, moralized or told me not to chew tobacco or scratch. Their conversation was invariably of the highest order and they sang tenor in church and played the auto-harp. None of them swore, gambled, or, to my knowledge, boozed on the side. No whisper of gossip ever reached my ears concerning them, or from them. All in all, they were good people without being stuffy about it.

Most of my memories of aunts seem to involve long summer afternoons when the locusts sang their loudest, women went to tea with parasols and men put on white duck trousers to play tennis at the parsonage. These were lazy times meant for hammocks, lemonade and palm-leaf fans. They were no longer than our present afternoons but since they were not broken up by TV programs and organization they seemed longer and people took time to sit out and enjoy the air. Then stories were made up for eager children, each with its events and characters as fanciful as those of Alice's tale. Many were continued from day to day and were embellished to suit the wishes of the listeners. "Tell us a story about Fatty and Skinny and the Electric Steam Rifle" someone would say and sure enough we would have such a story in

which each could identify himself in some heroic role. These stories never pointed a moral or painted idealistic pictures. Indeed, sometimes we found our infallible images consumed by tigers or bested by villains. Happy endings were not necessarily the rule although you knew that yourself as "Skinny, the Fearless Hunter" would be all right when Mother brought out the lemonade and drove the bat-winged unicorns under the hedge.

On beetle-buzzing summer evenings the aunts delighted to sit in the dusk and talk. Occasionally, if there were fireflies or heat-lightning they could be induced to tell stories about fire-balls, noises in the hall or ghosts. On such occasions the aunts were plagued unmercifully but they never complained or repeated themselves.

Many of the aunts' stories had some basis in fact. They were never complicated. The good guys and the bad guys were clearly identifiable. Whether we became good guys or bad guys in later life as a result of having heard these stories, I cannot say or am I particularly interested in speculating. All I know is that they gave us many moments of innocent merriment.

The aunts were, I presume, by modern standards, built-in "nannies" or baby-sitters, as they took children off their mother's hands at a time when there were few labour-saving devices. They became obsolete when labour-saving devices so boggled our minds with electronic complications that they became dead to fantasy and anything not directly concerned with uniformity and money-making.

All of the aunts of my childhood have left the scene now and as far as I am aware, no one takes them bunches of Sweet Williams because no woman wants to be called an aunt these days. Children are so organized that there is no time for swinging in hammocks. Hardly anyone goes for a walk with children. Indeed, going for a walk is a foolhardy venture due to the lack of paths and the ferocity of traffic. The art of story telling has almost disappeared due to the insistence of the head-shrinkers that all stories have happy endings and that all characters be white,

Yes, the shadows still dance on the lawn these summer afternoons, but they dance in the cut-and-dried world of Charles Dodgson the mathematician, rather than in the happy carefree summer days of Alice and Lewis Carroll, the story-teller. 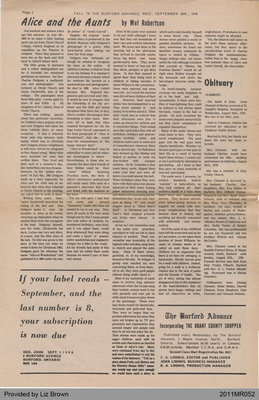