Creator
Robertson, Mel, Author
Media Type
Text
Item Type
Articles
Description
From the 1970s through the 1980s, Mel Robertson wrote many articles for the Burford Advance and Burford Times on the history of Burford Township. This clipping contains the article "Farewell to the Flats". The article may not have been republished.

FAREWELL TO THE FLATS

FAREWELL TO THE FLATS By Mel Robertson

In several articles recently I have referred to "The Playground Telegraph", that inexplicable, mysterious communication system whereby Children of the 1920s got information around without the aid of Fax machines, TV, Telephone, computer or other forms of electronic communication. There was nothing supernatural or anything out-of-this-world about it. "The Playground Telegraph" was merely an unspoken way whereby groups of children knew when there were pussy-willows to be picked in the swamp west of Burford, when the ice on "The Dead Pond" was thick enough to skate on, when groups of children were going sleigh-riding on Bishopsgate hill and when the creek was warm enough for a swim.

Such a communication system was essential in the 1920s for many reasons. There was no TV, and radio was in its infancy. There were no computers or Nintendo systems. Many houses lacked telephones and electricity. There were no explicit "How-to-do-it" books telling us how to do everything and no battery-operated hand-held devices to make us look intelligent as long as the batteries lasted. Almost every kid went to at least one Sunday School and much of a child's life was made up of what was heard there, what they read in books and what was told to them by imaginative parents. There was no organized sport for children and they were left to organize things for themselves. In other words, the world of a child in the 1920s was vastly different from the world of a child in 1991. Please remember this before you sneer at what I am going to write about - the annual "good bye" children gave to the local creek, or the Flats, in the 1920s.

The "Flats", or the area along Whiteman's Creek, was a second summer home for most Burford children in the 1920s. It was a little world of its own where children were free from parental admonitions and where they could make their own decisions. It was a place where they learned about Nature and the environment. Indeed, children spent so much of their summer time along the creek that they often thought of the place as a "Mother Nature" sort of environment with a living personality made up of all the living things such as animals, aquatic creatures, weeds, trees and bushes. We felt that we understood them and that they understood us. It was a friendly feeling. Consequently, when summer began to end in those far-off days of Childhood, we felt that it was only proper for us to say "Good Night" to our "Mother Nature" before she went to bed.

The annual "Good Night" trip usually came just before school reopened and created a crisis which prevented children from going to the creek every day. There was Saturday and Sunday of course, but that was not the same. For some reason the magic of "Mother Nature" disappeared with the summer leaves and some

mysterious urge called us to the scene of our summer adventures for the last time.

Consequently, on a nice day just before school opened a considerable number of children would be summoned by the "Playground Telegraph" to the corner of King and Maple. We didn't discuss our reason for being there and we didn't carry bathing suits, fishing poles, or any other summer paraphernalia. We just headed north over the fields to the fields to the creek and walked along the paths we had made in the summer. There our childish knowledge of Nature told us that our friends of the summer were getting ready to go to bed for the winter. Milkweed pods were blowing their floss, black-eyed Susans were everywhere and golden-rod and wild asters told us that Fall was at hand. No plans were made as we walked along for we knew that we would not be back to carry them out. No one said "Let's build a bridge to the Island", no one threw stones into the weeds where the big bass lurked or poked into the bank to see the Mud Puppy come out and walk along the bottom of the creek. No one suggested that we build a tree house or collect sticks for a little fire. We just walked along quietly saving good-bye to our favourite spots. Even the water in the creek seemed to be getting ready to rest from our summer harassment. Fallen leaves were beginning to collect in little coves or to swirl around in familiar eddies. No one said "Let's go for a swim" even though the water was warm. No one said "When we come down tomorrow we will dig a cave in that sand bank". No one suggested that we all carve our names on the big beech tree. We all knew that summer was over and that the time had come for us to put summer things to bed.

No one said much as we went along. Ground hogs watched us from their holes along the old mill race. Squirrels got cheeky knowing that no one would throw things at them. For some reason the birds who had talked to us all summer, were quiet, knowing, apparently, that they would soon be heading for warmer places. No one ran, jumped, or "rassled". This wasn't due to any feeling of sadness but rather to the feeling we had at home when Mother, or "Nana", came in to say "Good Night" and blow out the lamp. We knew that Mother and everything would be there in the morning but that there had to be a short interval of sleep full of pleasant dreams. No one had any doubts that there would be another summer and that our friends at the creek would be there to greet us when it came. Although we were all too young to appreciate the value of Faith I am sure that the promise of reunion we read about in "Hurlbuts Stories of the Bible" was not far from our minds.

Our little tour of the summer places took an hour or so and when it was completed we turned for home without a backward glance. We knew that there was no point in looking back because our summer world was about to go to sleep and didn't need any further "good nights". As we headed for

home we knew that we would be going back to the creek during the winter but that it would not be the same place it was in the summer. Even as we skated on the "Dead Pond", or on the creek, we knew that our summer world was now a sleeping world inhabited not by the pleasant and lively things of summer but by that mysterious presence children felt when they woke in a silent, sleeping, house at 3 a.m.

And so we said our annual good-bye to those summer things that added so much to childhood and trudged slowly back to the village. We did not realize that eventually we would say a final "good bye" to the summer of childhood and turn to other things.

Did we wonder, perhaps, if the summer things of Nature missed us? Were the ground-hogs and squirrels pleased because no one came to chase them? Did the black-

eyed Susans rejoice that they were no longer trampled under foot? Did the Mud Puppy who lived under the mud bank feel better now that no one poked it out of its underwater cave? Did the water of the creek leap with joy when it was no longer confined by little dams or diverted into child-made channels? We never knew, for eventually there was no one around to give us an answer.

Could we still ask children? I think not, for children of 1991 do not spend their summer days at the creek. Everything changes, for better or worse.

The only thing that remains is, perhaps, as the leaves begin to fall, some of us may recall, for a brief moment, a long, lazy, summer day when Mother Nature was very close to us and reality was far away. 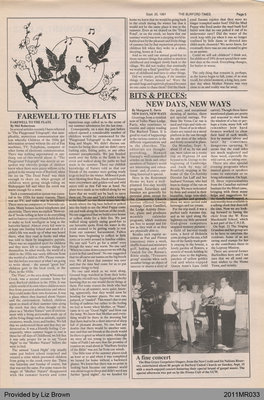